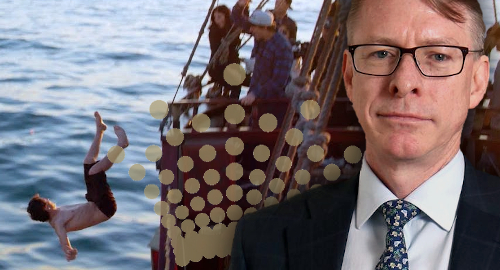 Australian casino operator Crown Resorts is reportedly losing its CEO as the fallout from the damaging report into its regulatory shortcomings continues to spread.

On Thursday, Australian media reported that Crown CEO Ken Barton had agreed to resign ‘in the coming days’ following a meeting with chair Helen Coonan. Barton has been under pressure to walk the plank since Tuesday’s release of a devastating regulatory report that found Crown unsuitable to hold a gaming license at its Crown Sydney venue in New South Wales.

ILGA commissioner Patricia Bergin concluded that Barton’s actions “demonstrated a serious lack of judgment” and his issues “will not be cured by the appointment of people expert in the field who report to him.” The report also concluded that Barton was too obsequious in his dealings with James Packer, Crown’s single largest shareholder (the report recommended Packer’s current 36% stake be reduced and capped at just 10%).

DIRECTORS STAMPEDE FOR THE EXITS
Barton’s imminent exit was preceded by Thursday’s resignation of director Andrew Demetriou, whose October testimony to the inquiry was viewed as equally inept. The ILGA report said the regulator “would be justified in lacking confidence” in Demetriou’s future adherence to anti-money laundering compliance.

Demetriou said Thursday that his immediate resignation was intended to boost Crown’s chances of gaining a ‘suitable’ recommendation for its Sydney casino. However, Demetriou took a few parting shots at the ILGA for including “unfair and unjust” comments about him in its report. Demetriou said he would “defend my reputation at every opportunity.”

Crown lost two other directors – Guy Jalland and Michael Johnston – in the immediate aftermath of the ILGA’s report. Both men are tight with Packer, serving executive roles at Consolidated Press Holdings (CPH), the umbrella group for Packer’s significant assets. Another Crown director, John Poynton, announced Wednesday that his CPH consultancy had been terminated, leaving Crown’s board (allegedly) free from further CPH influence.

Crown chair Coonan issued a statement Thursday thanking Jalland and Johnston for their service, while acknowledging that Crown had “much more to do” to get back into the ILGA’s good books. Coonan insisted that a “‘root and branch’ change” was underway to address the “serious conduct, culture and compliance issues” outlined in the report.

NATIONAL REGULATOR IN THE WORKS?
Many of Crown’s shortcomings occurred at its Melbourne casino, leading the Victorian Commission for Gambling and Liquor Regulation (VCGLR) to open a probe into the company’s suitability to hold a state gaming license. But the VCGLR has a history of treating Crown with kid gloves, based on its role as a major local employer.

The ILGA report has sparked calls for either greater cooperation between state regulators or the imposition of a national gambling regulator to eliminate the kind of local favoritism on display in Victoria. The ILGA report itself noted that the “fragmentation” of regulatory oversight meant “organized criminals and the money launderers have the advantages.”

CROWN SYDNEY FATE
Meanwhile, debate rages as to what exactly Crown needs to do to obtain a suitability recommendation for Crown Sydney, and how long this process might take. Some analysts have suggested it could take as long as two years for Crown to complete the overhaul necessary to get back in the ILGA’s good books.

But on Wednesday, ILGA chair Philip Crawford – who’d urged Crown to ditch its Packer-linked directors – hinted that the Sydney venue might obtain a gaming license as early as April (when the venue’s temporary liquor license is set to expire) depending on the company’s willingness to “blow itself up.”

However, while Crawford said the ILGA’s negotiations with Crown would get underway almost immediately, he hedged his bets by saying Crown “may never” be found suitable to operate in NSW. The ILGA board will meet Friday to discuss the report and the best way to move forward.