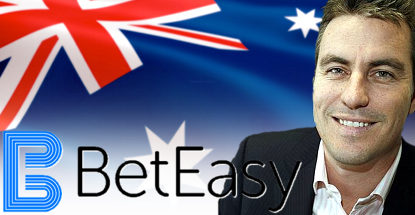 Tuesday witnessed the official launch of Matthew Tripp’s BetEasy, the self-described “last Australian operator on the shelf.” Tripp (pictured), who founded Sportsbet only to see it acquired by Irish upstarts Paddy Power, acquired BetEasy (then known as Betezy) in March for $10m. With Tom Waterhouse having sold out to William Hill, Tripp is positioning himself as the sole remaining option for Australia’s patriotic punters.

Tripp told the Australian Financial Review he was “very happy” with the way the Sportsbet sale played out – the $115m he pocketed can’t have hurt – but insists that he’s not building up BetEasy as another tempting morsel a corporate bookie may wish to gobble up. Tripp says he doesn’t see himself “jumping ship any time soon.”

To better establish BetEasy in punters’ heart and minds, Tripp says he’s willing to be “very accommodating” in terms of accepting wagers that corporate bookmakers and the TAB won’t touch. Tripp believes punters are in for “a pleasant surprise” if they check out BetEasy after having their wagers refused or limited by other bookies. And Tripp insists he’s referring not just to professional bettors but the “tens of thousands of disgruntled punters” he believes are roaming Australia’s streets with money in their pockets and vengeance on their minds.

Tripp believes the strategy, which includes “offers that have not been tried” in the local market before, will help separate his firm from the herd. BetEasy’s initial overture to punters includes $500 in free bets for new depositing customers and a $50 no-deposit wager for all customers, old and new, on either the 2014 Australian Football League final this Saturday (27) or the National Rugby League Grand Final on Oct. 5.

Tripp acknowledges his “extremely generous” strategy will pose a risk to BetEasy’s bottom line, but he insists he’s willing to take it on the chin for a time if it means doubling the firm’s current turnover to between $700m and $800m. Tripp told eGaming Review that punters “won’t have carte blanche to do what they like,” but he hopes to strike a balance between keeping punters happy and keeping BetEasy’s lights on.

Assuming he can pull that off, Tripp believes the company can turn a profit “within 12 to 18 months.” To handle the workload, Tripp plans to increase BetEasy’s staff from its current 120 members to 200 by Q1 2015. Tripp also confirmed that BetEasy was very much hoping to become the AFL’s new betting partner following the expiration later this year of Tabcorp’s four-year exclusive deal with the league.