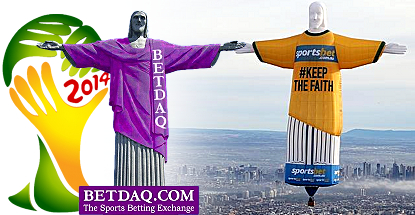 As expected, Australian online betting operator Sportsbet’s plan to float a giant Jesus balloon over the city of Melbourne has prompted prominent Christians to think very unchristian thoughts. The 46-meter high balloon is shaped like the Christ the Redeemer statue that overlooks Rio de Janeiro, where the 2014 FIFA World Cup is scheduled to kick off on Thursday. The balloon is emblazoned with the Sportsbet logo and the words “keep the faith,” which Sportsbet insists is intended to boost faint hopes that Australia’s ‘Socceroos’ will make it past the tournament’s Group stage.

Rev. Tim Costello, chairman of the Australian Churches Gambling Taskforce, has publicly bemoaned the fact that “there seems to be no corporate or civic responsibility to say ‘hang on, is nothing sacred?’” Costello went on to say that if Sportsbet’s marketers knew anything about Jesus, “they’d know he’d be overturning tables in the gaming halls, because they’re highly addictive and destroy lives.” If Costello knew anything about Sportsbet, he’d know Paddy Power’s Aussie offshoot doesn’t actually operate any tables or gaming halls, so we’ll call this ignorance contest a wash. 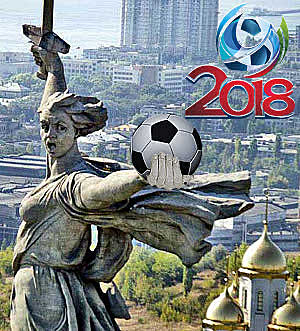 But Sportsbet aren’t alone in co-opting Christ to boost brand awareness ahead of the World Cup. Irish betting exchange Betdaq, a subsidiary of UK bookmakers Ladbrokes, is currently featuring its own take on the Redeemer statue. In Betdaq’s defense, the image of Christ wearing a Betdaq-branded robe is confined to the exchange’s home page, so anyone not already looking for a wager isn’t likely to happen across this bit o’ blasphemy, but they lose points for being second to show up at this party wearing the same outfit as someone else.

Meanwhile, Italian broadcaster RAI is coming under fire from Brazil’s Catholic Church for draping the statue in an Italian football jersey in a TV advert. The ad features the slogan “Brazil awaits us,” while the Church – which owns the statue’s image rights – responded with ‘a lawsuit awaits you.’ The ad has since been withdrawn.

All of this makes us wonder what companies will cook up for the 2018 FIFA World Cup in Russia. Volgograd has been proposed as one of the host cities and it boasts the largest statue in the world. The Motherland Calls, which honors the sacrifices made during World War II when the city was still known as Stalingrad, measures 87m in height, 57m taller than Rio’s statue. She carries a sword in one hand, but the other outstretched hand could easily contain a football (pictured right), a red card or a winning betting slip. Then again, messing with a Russian icon would risk the wrath of Tsar Vladimir Putin, whose anger is traditionally expressed in infinitely more lethal ways than those of Australian churchmen. Tread carefully, Irish impsters.