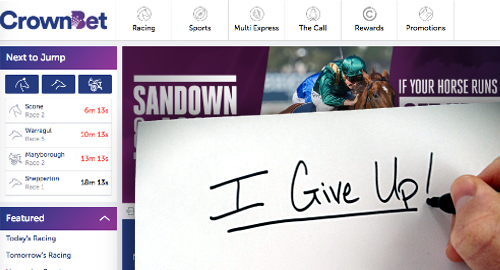 Australian online betting operator CrownBet has dropped its opposition to the proposed merger of Tabcorp Holdings and Tatts Group in exchange for increased digital streaming rights to racing coverage.

On Thursday, Tabcorp announced that CrownBet had agreed not to apply for judicial review of the Australian Competition Tribunal’s recent approval of the Tabcorp-Tatts merger. CrownBet has also agreed not to pursue further court proceedings following a Supreme Court hearing in New South Wales regarding the companies’ deals with clubs and hotels in the state.

CrownBet, which is (for the moment) majority controlled by casino operator Crown Resorts, had previously expressed opposition to the A$11b merger based on its belief that the enlarged entity would enjoy total control over Australian tote wagering, while also enjoying and retail wagering exclusivity in every state except Western Australia.

In exchange for CrownBet backing off its opposition, Tabcorp has struck a deal to supply a digital stream of SKY1 and SKY2 racing content for the personal use of CrownBet’s Australian wagering customers. CrownBet will pay Tabcorp an unspecified annual sum for these rights.

Crown Resorts has confirmed it’s having talks with rival betting operators regarding the sale of its CrownBet stake, part of Crown’s ongoing strategy of refocusing on its core domestic casino business. UK bookmaker William Hill, whose Australian operations have been struggling of late, has been mentioned as one of the companies with which Crown is reportedly discussing a potential deal.

Crown Resorts’ digital operations also include Betfair Australasia and the DGN Games social gaming operations, but the company has yet to indicate whether either of these properties is also on the block.