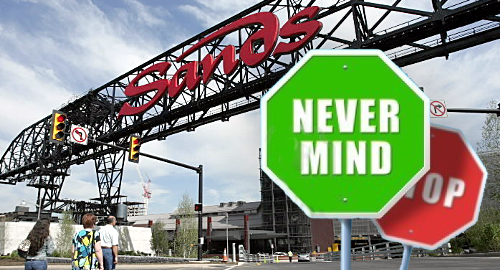 Talks regarding the sale of Pennsylvania’s market-leading Sands Bethlehem casino have reportedly broken off, according to local sources.

On Tuesday, the Morning Call quoted multiple sources saying that negotiations between Sands Bethlehem’s owner Las Vegas Sands and rival MGM Resorts had ended after MGM backed out of the proposed $1.3b deal to acquire the property.

In March, word surfaced that the parties had reached agreement on the broad strokes of a deal to transfer ownership of Sands Bethlehem, the market’s unquestioned leader in table game revenue and a perennial number-two on the slots revenue charts. However, both parties declined to offer public confirmation that a deal was in the works.

In the wake of the deal’s collapse, Sands spokesman Ron Reese played it typically close to his vest, telling the Morning Call that the company “will continue to operate Sands Bethlehem.” MGM’s spokesperson said the company had little to add at this time.

As for why Sands was interested in selling the highly profitable property so soon after announcing plans for a $90m expansion, it may come down to some of the various gambling expansion proposals currently being considered at the state legislature.

Some of these plans have included a dramatic expansion of video lottery terminals (VLTs) at non-casino venues like pubs and off-track betting parlors, as well as even daffier plans to authorize up to 25 new ‘satellite’ casinos across the state. Sands is also staunchly opposed to proposals to allow the state’s 12 casino operators to launch intrastate online gambling operations.

Reese said future investments in Sands Bethlehem will depend on which plan legislators choose to advance. “If job-killing policies that expand gambling are put in place, it’s infeasible to reinvest in this property.”

MGM has been on an expansionist tear in northeast US states of late, including the new MGM National Harbor in Maryland, the in-development MGM Springfield in Massachusetts, the acquisition of 100% of Atlantic City’s market-leading Borgata casino and efforts to add competition to Connecticut’s tribal casino operators. MGM is also prepping the launch of its first real-money online casino and poker operations in New Jersey’s regulated online market.