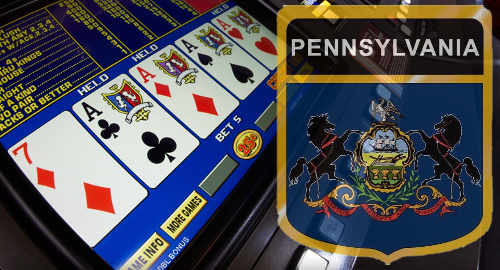 Pennsylvania’s controversial video gaming terminal (VGT) debate has resurfaced on the eve of an important legislative hearing on gambling expansion.

On Monday, a bipartisan group of state senators and representatives announced a new entry into the state’s burgeoning field of gambling expansion bills. While the bill’s full text has yet to surface, its supporters held a press conference on Monday to spell out its details.

The new bill’s main thrust centers around VGTs, specifically, the tens of thousands of illegal machines already operating in Pennsylvania, according to state police. The new legislation would authorize up to 40k legal VGTs at state bars, taverns, truck stops and off-track betting (OTB) outlets.

Sen. Guy Reschenthaler said the bill would allow up to five VGTs per bar or tavern, while truck stops and OTB outlets could offer up to 10 machines. Bets would be capped at $5 while payouts couldn’t exceed $1k per person per day. Reschenthaler believes VGTs could generate revenue of $100m in their first year and up to $500m annually by year five.

The government would impose a 34% tax on VGT revenue, while VGT operators would also have to pay a 4% local share tax. The local share tax issue is currently in a state of flux after the state Supreme Court ruled that it was unconstitutional for operators to pay different amounts based on the size of the community they served.

The proposed 34% VGT tax is significantly lower than the nation-high 54% tax that Pennsylvania levies on slot machines at the state’s dozen licensed casinos. To mollify casino operators, the new bill calls for the 34% share of the slots tax that currently goes to property tax relief to be reduced to 29%.

The new bill also calls for the elimination of a casino resort license that was to come online in 2017, while imposing a three-year delay on issuing a new racino license.

Penn Live reported that Hollywood Casino operator Penn National Gaming (PNG) was on board with the bill, with the strict proviso that the bill doesn’t undergo any future revisions.

PNG senior VP Eric Schippers said the state’s other 11 casinos “are going to have to sit down with their business people and accountants too and run the math,” but he believes the bill “does a good job” in balancing slots tax cuts with the expected cannibalization the casinos’ slots operations will suffer from the new VGT competition.

The state’s casinos have previously expressed vehement opposition to the authorization of VGTs, particularly during last year’s gambling expansion debate, in which VGTs were credited with killing the state’s chances of approving legal online gambling.

Pennsylvania’s House Gaming Oversight Committee is scheduled to hold its latest hearing on the state’s various gambling expansion proposals on Tuesday at 10am. It remains to be seen how many – if any – of PNG’s local rivals will be equally pacified by the new VGT bill’s sweeteners.