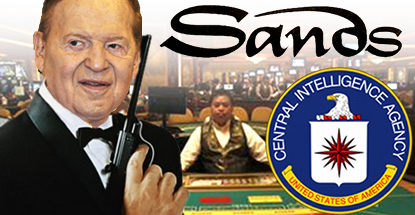 Beijing prevented the establishment of a US consulate in Macau over fears that US intelligence agencies would use the US diplomatic presence to blackmail Chinese public officials.

The claim was revealed in a 2010 document commissioned by the Asian division of casino operator Las Vegas Sands and subsequently obtained by the Investigative Reporting Program at the University of California, Berkeley. As reported by The Guardian, Beijing also feared that Sands and its cantankerous owner Sheldon Adelson (pictured) were cooperating with US intelligence agencies’ efforts to dig up dirt on Chinese officials.

According to the Sands China-commissioned document, whose author is unknown, Beijing believed the Central Intelligence Agency and the Federal Bureau of Intelligence were “very active” in Macau and had “penetrated and utilized” casinos operating in Macau in gathering intelligence on Chinese officials.

The CIA and FBI agents were believed to be monitoring activity inside the casinos, then “luring and entrapping” Chinese officials suspected of gambling with public money “to force them to cooperate with US government interests.”

Beijing’s suspicions were reportedly aroused following a 2005 US government report that identified Macau as a primary conduit for North Korea’s money laundering activities. The report claims Beijing was “shocked” and “stunned” by the detail and accuracy of the 2005 report.

Sands China was identified as the “primary subject” of Beijing’s suspicions as to the genesis of the US government’s information. The report claims that there was “a widely held perception amongst officials that Sands serves the interests of the US government” in Macau.

The documents were uncovered as a result of the wrongful termination lawsuit brought against Las Vegas Sands and Adelson by Steve Jacobs, the former CEO of Sands China. Jacobs has previously alleged that Adelson had ordered investigations of Macau officials – including Fernando Chui, the special administrative region’s CEO – to dig up dirt that could be used as leverage in future negotiations over gaming-related issues.

The report also noted Adelson’s infamously brusque manner of speaking, claiming he made an “assertive and provocative statement” to mainland officials about Sands’ ability to transform Macau. Beijing reportedly interpreted this as a challenge to their authority. A US State Department cable previously published by WikiLeaks had referenced Adelson’s “combative” attitude as having left a bad taste in the mouths of many Chinese officials.

EFFORTS TO OBTAIN VICKERS REPORT BLOCKED
Sands spokesman Ron Reese called the report “a collection of meaningless speculation” and characterized the suggestion that Sands was colluding with US intelligence agencies as “an idea for a movie script.” Reese claimed that “unfortunately for conspiracy theorists,” the leaked document was “much ado about nothing.”

The publishing group behind The Guardian had made legal appeals for the release of the Vickers report but US District Judge Elizabeth Gonzalez, who is handling the Jacobs’ case, rejected these attempts last week based on her judgment that the report contained sensitive commercial and gaming information.

However, Gonzalez left open the possibility that The Guardian could try again once the Jacobs’ suit reaches trial. Sands is currently appealing Gonzalez’s May ruling that the suit could be tried in Nevada, based on Sands’ belief that Macau is the appropriate venue. The trial is scheduled to begin in October although the protracted discovery process could delay the start until late-2016.