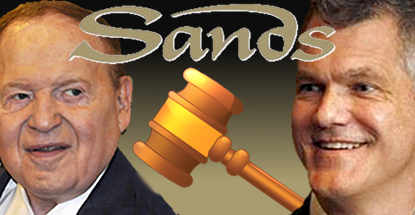 The former CEO of casino operator Sands China has been granted the right to use Las Vegas Sands’ alleged efforts to dig up dirt on Macau officials in his wrongful termination suit. On Tuesday, a federal judge in Nevada authorized former Sands China CEO Steve Jacobs to utilize a report on Sands’ investigation of Macau officials, which Jacobs claims could cause “serious political and legal problems” for the casino company.

Jacobs was abruptly sacked from his CEO role in July 2010 for still somewhat murky reasons. Since then, the two sides have engaged in a nasty bout of public sniping, which has spawned numerous additional lawsuits for defamation. The Nevada courts are still trying to determine whether the state is the proper venue to hear the suit, as Jacobs would prefer, while Sands insists jurisdiction belongs to Macau. An April 20 hearing has been set to decide the matter.

Sands was also attempting to keep secret two other reports on its background checks into specific individuals, including Cheung Chi Tai, reported to be a key figure in Macau junket operator Neptune Group. In November, Hong Kong police reportedly froze Cheung’s assets as part of a money laundering investigation. Jacobs’ suit alleges that he and Adelson differed over whether Sands China’s board should be made aware of media reports that Cheung had links to Hong Kong triads.

Sands’ attorneys had argued that the reports are their property that was stolen by Jacobs before they escorted his sacked self to the exits. They claim Jacobs’ efforts are little more than blackmail and a bid to use the reports’ “sensitive information” for Jacobs’ financial gain. Sands’ attorneys maintained that all this meant the reports should be inadmissible in court.

Not so, according to Nevada District Judge Elizabeth Gonzalez, who said Jacobs could use the report in his lawsuit. However, Bloomberg reported that Gonzalez will consider the reports as confidential information, which will keep them from the public eye. Sands had argued for the reports to be labeled highly confidential, which would have made their contents known only to the judge and attorneys handling the suit.

No doubt US federal agencies would like a gander at Sands’ confidential reports. The feds have been paying closer attention to US casino operators’ activities abroad, with a particular emphasis on potential violations of the Foreign Corrupt Practices Act. In January 2013, Sands agreed to curtail its practice of moving money between its subsidiaries on behalf of its VIP gambling clients. In November, the Wall Street Journal reported that US Attorneys were examining Wynn Resorts’ dealings with Asian high-rollers.

ASIAN AMERICAN DROPS $5B LAWSUIT AGAINST SANDS
Sands did receive some positive legal news after Asian American Entertainment Corp (AAE) dropped its $5b lawsuit against the company in late December. In July, AAE filed suit against Sands, with whom AAE had partnered on a Macau casino bid back in 2001. Sands ultimately terminated the arrangement and chose to partner with Galaxy Entertainment Group on a successful bid, prompting AAE to cry foul and file for a hefty chunk of Sands China’s profits. AAE boss Shi Sheng Hao filed a similar lawsuit against Sands in Nevada in 2007 and another in Macau in 2012. Neither AAE nor Sands has publicly commented on the dismissal.