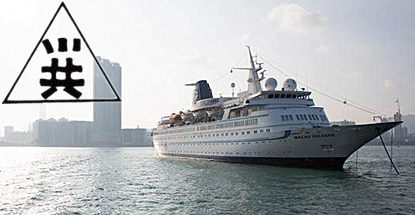 Macau casino investor Success Universe Group (SUG) has officially disposed of its stake in Hong Kong-based casino cruise ship Macau Success. Star Sail Investments Ltd. paid HKD 93m (US $12m) to acquire SUG’s 55% stake in the nine-deck passenger vessel. SUG chairman Sonny Yeung acknowledged that the casino cruise business had been “a steady revenue contributor” for the company but the company had taken the opportunity to “realize its investment in the cruise ship with a gain.” SUG expects the sale will produce an unaudited pre-tax gain, before expenses and non-controlling interests, of HKD 44.2m ($5.7m).

Meanwhile, last week saw Hong Kong police launch a preemptive crackdown on two rival triad groups that had been feuding over casino cruise customers. There are seven casino cruise ships that sail nightly from Hong Kong ports and three triad groups – Sun Yee On, Wo Shing Wo and Wo On Lok – reportedly have established designated sites outside train stations from which to solicit potential passengers/gamblers who arrive in Hong Kong.

On July 3 and 4, police raided over 30 locations in Hong Kong, arresting eight suspected Wo Shing Wo and Sun Yee On members. The two gangs had reportedly been squabbling over customers coming out of the Hung Hom train station, offering would-be gamblers free tickets and overnight rooms on the ships in exchange for buying over HKD 50k ($6,450) in gambling chips aka ‘mud chips.’ Once on board, the triads also offer high-interest loans to gamblers who find themselves down on their luck.

The Sun Yee On faction believed they had the Hung Hom turf staked out for themselves, so when Wo Shing Wo leader Fei Sing sent female agents to solicit passengers, around 35 members of both triads reportedly held impromptu ‘negotiations’ on the street outside the station. Afraid that these talks wouldn’t remain limited to angry words for long, police felt compelled to intervene. A source told the South China Morning Post that the arrests were a message from the police that if the triads can’t regulate themselves, police would do it for them.