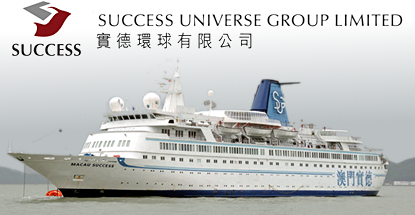 Genting Hong Kong is looking to expand its fleet of cruise ships. Genting, which operates the Star Cruises line of floating casinos, recently announced it had secured $825m in financing to help pay German shipbuilder Meyer Werft GmbH to build the vessel. Genting didn’t specify whether the new addition to its fleet would contain onboard gambling options, but said the ship would be “designed to cater for the unique demands of Asian clientele.” Ahem.

Star Cruises operates five ships offering gambling on the high seas in runs connecting mainland China with ports of call in Taiwan and South Korea. Another Genting subsidiary operated ‘cruises to nowhere’ from Miami into international waters where shipboard casino gambling was legal. Those ships now ferry gamblers from Miami to Genting’s Resorts World Bimini resort-casino in the Bahamas.

As one operator expands, another contracts. Macau casino investor Success Universe Group (SUG) is selling its 55% stake in its Hong Kong-based casino cruise operation due to spiraling costs. SUG operates the M.V. Macau Success, a nine-deck cruise liner with a 660-passenger capacity. The ship, which was built in 1974, sails daily into international waters, allowing people to gamble the night away before returning them to shore the following day.

In SUG’s 2013 annual report, cruise ship gambling turnover came to HKD 84m (US $10.8m) while profit fell to HKD 500k from HKD 2.9m the previous year. Turnover growth fell from 16% in 2012 to just 4% last year. SUG deputy chairman Hoffman Ma told GGRAsia that the company had decided to sell because it had been offered a good price and because “the ship is getting old and costs are going up.”

While no formal deal has been struck, SUG filed notice with the Hong Kong Stock Exchange that it was negotiating with an “independent third party” interested in acquiring majority control of the business. SUG holds a 49% stake in Macau’s Ponte 16 casino, which operates under an SJM Holdings license.