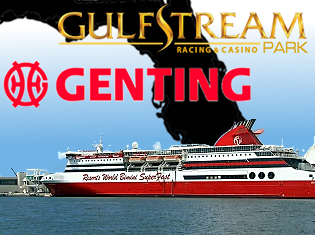 Genting Resorts World has teamed with a Florida racetrack on a proposed slots-only casino project, suggesting that the Malaysian casino operator has grown tired of pushing for an elaborate resort casino in the Sunshine State. On Monday, Genting announced it wants to use a gaming license held by racing operator Gulfstream Park to open a facility in Miami’s Biscayne Bay offering 2k slot machines, poker and off-track betting.

Located midway between Miami and Fort Lauderdale, Gulfstream officials maintain that they hold an unused gaming license that is valid in both Miami-Dade and Broward counties. To support this claim, Gulfstream staged a 150-yard, three-horse race last July on a piece of their property that juts over the Broward county line into Miami-Dade. But this belief has yet to be endorsed by state regulators, who filed an official complaint of Gulfstream’s three-horse race a week after it took place. What’s more, Genting’s facility would be the first non-tribal gaming establishment in Florida to offer slots minus the presence of some kind of racing track.

To sweeten the pot for Florida’s politicians and regulators, the Genting-Gulfstream deal envisions an expansive partnership in which proceeds from the facility would be shared with the state’s horse breeders, trainers and owners. Lonny Powell, CEO of the state horsemen’s association, told the Miami Herald that the “game-changing” deal is on par with the invention of sliced bread. “This is the first partnership where the revenue stream and investment would actually go back into the horses.”

Genting’s struggles in Florida are the stuff of legend, having spent $236m on 14 acres of Miami‘s waterfront nearly three years ago and millions more lobbying politicians to tweak the law to permit construction of the $3b Resorts World Miami project. But despite the occasional use of profanity, Genting has been unable to successfully navigate the state’s fractious gaming environment. (On Jan. 15, Orlando-based anti-gambling group NoCasinos.org will release Pushing Luck, a documentary promising a “sobering glimpse” of the “broken promises” of casino bosses. Sounds fair and balanced.)

EVEN GILLIGAN’S BOAT OFFERED THREE-HOUR TOURS
Genting’s experience running an Asian-facing casino cruise business allowed the company to think outside the box, leading to last summer’s launch of twice-daily sailings between Miami and Resorts World Bimini in the Bahamas, just 50 miles off the Florida coast. Genting also offered Evening Excursions aka “cruises to nowhere,” a two-hour foray into international waters and back again, in which players could partake of all the gambling they could afford, including sports betting. In exchange, Genting agreed to make $11m worth of port refurbishments in Miami and agreed to pay the city $7m in annual rental for the next decade.

But Genting scaled back its cruise operations in late November after US Customs and Border Protection officials ordered Genting to hire only US workers on its Excursions. Genting is contesting this order in federal court, arguing that maritime law allows other Miami-based cruise lines to hire non-US employees for various service positions. The government has countered that these laws apply only to ships that dock at a foreign port and Genting’s nowhere cruises don’t require passengers to present a passport. Genting insists that it can’t afford to hire an all-US crew, in part because of the severance liability for its current crew.

Genting is also having difficulties completing its pier in Bimini, forcing the company to ferry small groups of passengers to shore and back in small boats, a process that is not only time-consuming but difficult to pull off when the waves get choppy. All told, Genting believes its Florida cruise business will lose $11m in 2014, but the company has said there will be no order to abandon ship.

Not all of Genting’s US experiences have been as frustrating. Genting’s proposed racing tie-up mirrors its experience in New York State, where it operates the extremely successful slots-only Resorts World New York at the Aqueduct Racetrack. In Nevada, Genting is planning to spend up to $4b converting Boyd Gaming’s aborted Echelon project into Resorts World Las Vegas.