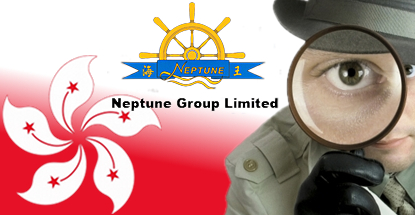 Hong Kong authorities have launched a money laundering investigation of a key figure in the Neptune Group, one of Macau’s largest casino junket operators. On Nov. 30, a notice was posted in the South China Morning Post stating that police had frozen the assets of Cheung Chi Tai, reputed to be one of the main investors in Neptune, along with seven companies connected to Cheung. The notice was posted because Hong Kong police have been unable to ascertain Cheung’s whereabouts.

A senior exec at Neptune told the Wall Street Journal that Cheung wasn’t a current investor in the company and that Cheung had no business connections with Neptune. Asked about Cheung’s presence at a Neptune event this March, during which Cheung distributed business cards identifying him as an executive director of the company, the Neptune exec said “further action” would be taken to prevent any “unauthorized usage” of the company’s name.

In April, Next magazine reported that Cheung’s wife Ng Chor Har had been detained by Hong Kong authorities on charges of money laundering. Cheung’s name has also surfaced in Nevada’s illegal sports betting case against Paul Phua after the FBI discovered a digital copy of Cheung’s passport on a computer belonging to one of the Phua defendants. The FBI has alleged that Phua’s group was using Neptune’s VIP gaming rooms in Macau to distribute winnings to bettors.

Junket operators have been under increased pressure during Macau’s ongoing revenue decline, which has been driven by a sharp drop in VIP gambling. A perfect storm of factors has restricted junket operators’ ability to front money to China’s VIP gamblers, and the resulting margin squeezing has prompted some smaller junket operators to fold their tents.

On Tuesday, Japan’s Daiwa Securities Group said it expects more junket VIP room closures in the coming months as junkets become increasingly competitive, which will “likely be margin dilutive.” Daiwa also suggests the “sense of pessimism and segment pressures are likely to become longer-term issues.” Other analysts have projected Macau hitting bottom early in 2015 and recovering by the second half of the year but Daiwa believes “a fundamental bottoming-out in the first quarter of 2015 is increasingly unlikely.”

Daiwa says Macau’s slump is “more structural and longer term in nature than is widely appreciated.” Daiwa believes 2015’s VIP run-rates will eventually stabilize at “near-third quarter 2014 levels,” which would equate to a 19% year-on-year decline, more than twice the 8% decline other analysts have projected.