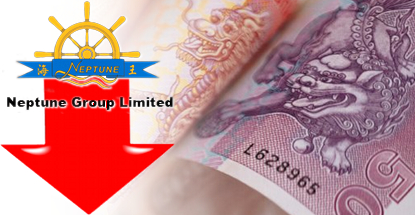 However, Neptune’s earnings fell 8.7% to HKD 517.6m ($66.7m) and net profit was HKD 148.8m ($19.2m), barely half the sum Neptune reported the previous year. Neptune booked an impairment loss of HKD 111m related to its 5% investment in Joyful Celebrate, a VIP gaming promoter that operates out of Galaxy Macau, following an “unfavorable change in the market condition subsequent to the acquisition.” Macau’s current revenue decline is largely a result of decreased VIP gambling as Chinese high-rollers lower their profile to avoid becoming the nail that gets hammered by President Xi Jinping’s crackdown on corruption.

A further impairment of HKD 88.7m was booked related to the company’s acquisition in February of 5% of Superior Wealthy, which controls a VIP room at City of Dreams, a deal for which the company now believes it overpaid. Given the combined effect of these two transactions on profit, Neptune’s directors did not recommend payment of a final dividend for the year.

Neptune noted that the entire Macau gaming market had been “slightly affected” by the Chinese economy’s “soft landing” in H1 2014 and Neptune warned that “the signal of significant rebound of peak festival holidays in months ahead can be deceptive and fleeting.” Caveats aside, Neptune remains “cautiously optimistic about the VIP room business” but is also looking beyond Macau “to balance its sources of revenue.”