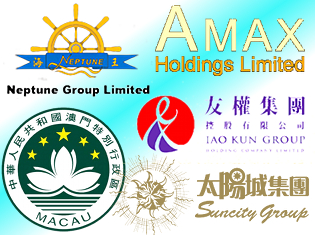 Macau casino junket investor Iao Kun Group Holding (IKGH) Company (formerly Asia Entertainment & Resources Ltd.) saw its net income tumble over 69% to $6.9m in Q3. Rolling chip turnover in the quarter was up a modest 2.2% to $4.1b, but a higher than average win rate (3.22%) helped push revenue up 12.8% to $61m during the quarter. The company blamed the income decline on higher commissions paid to its junket agents due to IKGH no longer providing complimentary hotel services. Other factors taking a bite out of IKGH’s bottom line were increased competition, a smaller percentage of direct (non-credit) business plus higher selling, general and administrative expenses.

The current quarter hasn’t started off well for IKGH, with rolling chip turnover up 3% in October but win rate coming in at 2.27%, well below the normal range of 2.7% to 3%. Regardless, IKGH chairman Man Pou Lam said the company’s strategy “remains unchanged.” IKGH has launched a marketing campaign to “augment our non-marker agent base” and is sticking with full-year income guidance of between $46m and $52m. IKGH operates 40 gaming tables at five VIP rooms in Macau, including Galaxy Entertainment properties Galaxy Macau and StarWorld, Melco Entertainment’s City of Dreams, Sands Cotai Central and SJM Holdings’ Le Royal Arc.

AMAX RESUSCITATES CYPRUS CASINO DEAL, WARNS OF LOSSES
Junket investor Amax Holdings has changed its name to Amax International Holdings to better reflect its efforts to expand its presence beyond Macau. In August, Amax announced it was looking to buy the Grand Hotel and Casino in Vanuatu from its Australian owners, Zagame Corporation Pty Ltd. Amax’s plans to open a casino in the Turkish half of Cyprus are also back on again. In July, Amax announced plans to acquire 51% of Southern Ruby Ltd., which holds the exclusive right to operate a casino in the Lara Park Hotel in the town of Gime. In September, Amax said it had been unable to finalize the deal with Southern Ruby, but Amax announced this week that the parties were back at the negotiating table and hoped to complete the deal by Nov. 30 “or such other date as may be agreed.”

Amax’s overseas ambitions haven’t yet generated any revenue, leaving the financially struggling firm warning investors that it expected to record a loss in its fiscal H1 ending September 30. In August, Amax expressed “significant doubt about the group’s ability to continue as a going concern” after recording a loss of $5m in its fiscal year ending March 31. Amax says the expected H1 loss stems from the August 2012 decision by SJM Holdings to shift around 40 gaming tables from the Greek Mythology Casino to another of its more profitable casino properties. Amax holds a 24.8% stake in Greek Mythology, and the table reallocation resulted in a precipitous drop in Amax’s earnings.

NEPTUNE ADDS GALAXY MACAU STAKE; SUNCITY GETS INTO PUBLISHING
Mega-junket investor Neptune Group has followed through on its plan to purchase a stake in a company with ties to the Galaxy Guangdong VIP Club at Galaxy Macau. Neptune has paid HKD 241m ($31.1m) for a 5% stake in Joyful Celebrate Global, a British Virgin Islands-registered company owned by Jason Tsang Ho Yan. Joyful Celebrate owns a junket promoter that’s entitled to 0.3% of the rolling chip turnover generated at the VIP Club, which recorded around HKD7.5b ($967m) in monthly turnover during the past 12 months. Neptune expects its new acquisition will generate profits of “not less than HKD271m” ($35m) in the first year following the acquisition.

Finally, junket operator Suncity Group has launched a new lifestyle and business magazine to better inform and entertain its VIP gamblers. The publication, dubbed ‘First’ in a possible nod to Suncity’s stature in Macau’s junket ranks, will be published by Edipresse Asia. The first quarterly edition of First is set to make its debut before the year is out.