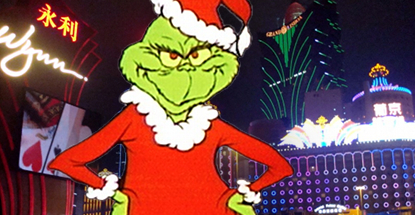 Analysts are projecting a dire December and an crappy new year for Macau casino gaming revenue. The world’s top gambling hub is currently mired in a six-months-and-counting revenue slump and Credit Suisse believes December’s results could fall as much as 30% year-on-year.

Credit Suisse says the decline will be aided and abetted by two factors: stricter transit visa rules at Macau’s Zhuhai border crossing and the hotly anticipated arrival in Macau of China’s premier Xi Jinping on Dec. 15. Xi is coming to celebrate the 15th anniversary of the special administrative region’s handover from Portugal and China’s high-rollers are believed to be keen to avoid all the extra scrutiny Xi’s visit will bring.

Credit Suisse’s estimate is currently the most bearish, although other analysts have been downgrading their own expectations. Wells Fargo expects a 22% decline while Deutsche Bank is slightly less pessimistic at 21%.

Macquarie analysts said the two previous Macau slowdowns in 2009 and 2012 were followed by “strong recoveries ignited by unprecedented credit growth in shadow banking.” But Macquarie believes these recoveries aren’t likely to repeat themselves this time because “Beijing is firm on curbing shadow banking.” Macquarie urged its clients to dump all their Macau casino stocks except for Melco Crown Entertainment, but Macquarie cautioned that even Melco would likely see profits fall between 25% and 31% in 2015.

Macau Chief Executive Chui Sai On, who begins his second term in office on Dec. 20, has said his administration is prepared to deal with the ongoing decline. Macau’s government earns the vast bulk of its operating budget from gaming but Chui said the government had made the necessary contingency plans to ensure it had sufficient fiscal reserves to maintain public services throughout the slump.

Pansy Ho, co-chair of the MGM China joint venture and daughter of Macau casino icon Stanley Ho, said earlier this month that Macau’s slump was “normal” given the cyclical nature of business. Ho noted that Macau’s gaming revenue had undergone “a decade of continuous double-digit growth” and it wasn’t logical to believe this phenomenon would go on forever. Taking a long view, Ho told Guangzhou Daily that she didn’t view a six-month slump as “a very pessimistic picture.”