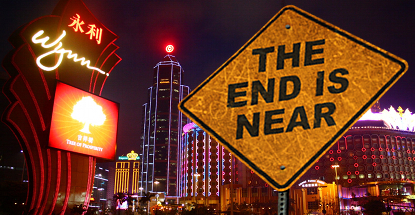 Macau casino revenue may fall as much as 21% in November if current trends continue, according to analysts at Credit Suisse AG. Other analysts concur, with UBS expecting a monthly decline of between 17% and 22% while Wells Fargo suggested a fall of between 18% and 21%. Macau is currently undergoing an unprecedented five-month long revenue slump that has formerly bullish analysts now outpacing each other to predict even ghastlier horrors to come.

Credit Suisse says gaming revenue at Macau casinos through Nov. 16 came to MOP 12.75b (US $1.6b). The average daily revenue over the first half of November was MOP 797m, down from MOP 850m in October and 852m in September. Worse, the week of Nov. 10-16 was 11% lower than the week before, suggesting the decline is accelerating.

Ambrose So, CEO of Macau’s largest casino operator SJM Holdings, told Macau Daily that full year revenue growth for 2014 could well turn out negative. So said that even if November and December somehow manage to match last year’s returns, the annual growth would only amount to 2.3%. With both months expected to be sharply down, So believes all that’s left to determine is how great an annual decline Macau will see.

Japanese analysts Daiwa Securities are already projecting 2015 will witness a 7% decline in annual gaming revenue. Daiwa’s Jamie Soo said “prevailing segment weakness will be the norm” for VIP gambling revenue in the coming year. Ditto for the premium mass segment and even the bottom-tier ‘grind mass’ market is undergoing a “structural shift to lower-spending tourists; a divergence between record-high rising tourist arrival and falling mass revenue growth.”

Soo warned that casino operators with mega-resorts set to open on Cotai over the next year or two “are likely to see downside risks.” Both Galaxy Entertainment Group and Melco Crown Entertainment are expected to open new Cotai properties in the second half of 2015. Soo says a combination of wage inflation, declining table yields and increase competition means the “build-it-and-they-will-come mantra is no longer a valid investment thesis.”