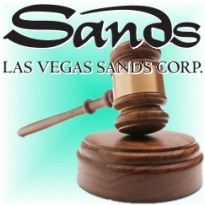 Las Vegas Sands (LVS) has been hit with a MOP3b ($375m) breach of contract lawsuit regarding the circumstances under which LVS obtained its Macau gaming license in 2002. In a lawsuit filed in Macau in January, LVS’ former partner Asian American Entertainment (AAE) accuses LVS of breaking an Oct. 2001 agreement to jointly bid for a Macau gaming license via LVS subsidiary Venetian Venture Entertainment (VVE). LVS has two months in which to legally respond to the suit, but LVS spokes-folks were declining public comment on Tuesday.

In Dec. 2001, AAE submitted a Macau casino license bid on behalf of itself and VVE, one of 18 bids submitted in Macau’s first go-round under its new licensing regime. But when Macau authorities issued the first three licenses in Feb. 2002, LVS was given the nod in a partnership with a division of Hong Kong-based Galaxy Entertainment. That partnership dissolved the same year, and Galaxy later received its own gaming license in the white-hot Asian gambling enclave. AAE claims LVS went behind its back by partnering with Galaxy while the AAE/LVS partnership was still active.

AAE is controlled by Taiwanese businessman Shi Sheng Hao aka Marshall Hao. A spokesman said Hao was “sorely disappointed with how LVS has broken its promises in Macau, and he is willing to fight for AAE’s rights and do whatever it takes.” Perhaps. The company brought a similar suit against LVS in Nevada in 2007, but that case was dismissed in 2010 after AAE declined to pursue the matter further, despite winning a few preliminary rulings.

Ironically, legal lethargy on LVS’ part has resulted in the UK Court of Appeal ordering LVS and boss Sheldon Adelson to pay $1m court costs to workers union UNITE HERE. Adelson & Co. had filed a defamation suit against UNITE after the group allegedly made anti-LVS comments at a Labour party meeting in 2004, but LVS subsequently appeared quite casual about following up on the matter in court. In October 2011, a UK judge decided LVS wasn’t seriously pursuing the defamation suit and ordered Adelson & Co. to pay UNITE’s court costs. This finally got LVS’ attention, and they announced their intention to appeal, but the Court of Appeal has now rejected that gambit, leaving LVS with no recourse except to pay up.

Las Vegas Sands may be interested in Crown, Okada acquisitions
Erik Gibbs
7 May 2020

US casino staff seek reassurances before returning to work
Steven Stradbrooke
6 May 2020
.