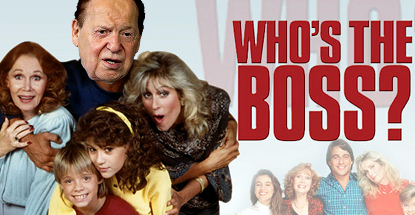 Las Vegas Sands boss Sheldon Adelson occasionally needs to be reminded that he isn’t always the most powerful person in the room, especially when that room is a US District Court.

Adelson has been testifying this week in his four-year-long court fight with former Sands China CEO Steve Jacobs, who was sacked in 2011 after clashing with Adelson over still somewhat unclear reasons. Jacobs has sued for wrongful termination and the bitter war of words that followed has led to multiple defamation suits filed by both sides.

In his first court appearance on Tuesday, Adelson denied being Sands China’s puppet master, saying he was ‘not hiring and firing the housekeeping department.” Adelson claimed there was “no way any one person can operate an 8,000-mile-away property.”

Jacobs’ attorney Steve Bice countered this claim by producing emails that indicated Adelson was very hands-on, including wanting to know if Jacobs had followed Adelson’s order to rejig the casino floor to ensure better access to gaming tables. (These were apparently sent by a secretary on Adelson’s behalf, as he famously claims not to use email.)

Adelson was also asked about Leonel Alves, a Macau legislator and former outside legal adviser to Sands China. Jacobs claims that he cut ties with Alves after Alves asked for $300m to resolve some legal issues Sands China was having in Macau, only to have Adelson order Jacobs to rehire Alves. Adelson claimed he hadn’t even heard Alves’ name until Jacobs began asking questions but Bice eventually got Adelson to admit he’d “recommended” that Alves be rehired.

GET YOUR HANDS OUT OF MY POCKET, LEECHES!
Adelson’s initial court appearance also featured an unprompted rant about greedy executives. It began as an attack on Jacobs’ pursuit of 2.5m Sands China stock options he claims to be owed. Adelson said Jacobs was “avarice and greedy beyond reasonable” and that bonuses and stock options amounted to Jacobs being paid two or three salaries for doing one job.

Adelson then branched out into an attack on all Sands execs posted in Macau and Singapore, where Sands China does business. Adelson complained about having to pay up to $30k per year in school fees for each child these execs brought with them to Asia, rising to $50k per year for college-age offspring. Adelson said execs in Singapore were already enjoying $25k monthly housing allowances plus use of a car, and “not a Toyota like they would drive here.”

Adelson also criticized his execs for flying their families home to the US four times a year, a frequency he deemed “not acceptable.” The fact that these families were flying first class on his dime also stuck in Adelson’s craw. Adelson mentioned that he was considering putting a two-year cap on his execs’ overseas postings.

WHO’S THE BOSS?
Adelson was back on the stand on Friday, spending the first 30 minutes evading a direct answer to a question from Jacobs’ attorney James Pisanelli about who sent a particular email to Jacobs. Adelson has spent a good deal of his time on the stand lecturing Jacobs’ attorneys on the types of questions they are or aren’t allowed to ask and initially refused to answer Pisanelli’s question on the grounds that it was abusive.

District Judge Elizabeth Gonzalez intervened, telling Adelson to answer the question. But Adelson just went on claiming that the question was beneath contempt, prompting Gonzalez to remind Adelson that “you don’t get to argue with me. You understand that?” After all that, Adelson grudgingly answered Pisanelli’s half-hour line of questioning with an “I don’t know.”

Adelson will be back on the stand – or the judge’s bench, if he keeps on confusing the pecking order – on Monday.