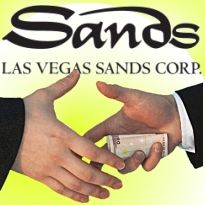 If you ever doubted the many and varied benefits a significant presence in Asia can bring to a business, consider the fact that Las Vegas Sands’ credit quality is getting investment grade treatment from banks. Bloomberg reported that lenders in a $3.6b credit facility dropped demands for Sands to use excess cash at the end of its fiscal year to pay down the loan’s outstanding balance – a perk generally afforded to only the most highly regarded borrowers. Compare that to Caesars Entertainment, which doesn’t have a presence in Macau, but does have over $20.3b in debt. Of the 64 members of Motley Fool CAPS that have rated the company, 83% predicted Caesars’ stock would underperform the S&P 500 going forward. Hardly surprising that most banks are treating Caesars’ loan obligations with variations of the Goodfellas ‘fuck you, pay me’ mantra.

That said, doing business in Asia is not without its potential pitfalls. The Wall Street Journal reports that in 2009, Sands received an email from Leonel Alves, a Macau legislator and Sands’ outside legal adviser, who claimed to have been approached by “someone high ranking in Beijing” about making a deal. Alves reportedly suggested that by paying $300m to this high ranker, Sands would secure long-awaited government approval to sell a $1.4b Four Seasons-branded luxury-apartment complex adjacent to Sands’ Venetian Macau casino – land that had been designated as for casino and hotels only. Alves’ email also suggested the $300m would help settle Sands’ lawsuit with its former Taiwanese business partner Marshall Hao, who had accused Sands of breaking a 2001 agreement to jointly apply for a Macau gaming license.

Alves’ September 2009 email was addressed to Steve Jacobs, the former Sands China CEO currently waging his own lawsuit with his former employers. In December, Alves met with Hao in Macau, where they reportedly arrived at a figure of $100m that would satisfy Hao’s litigious urges. Alves then sent Jacobs another email, saying he would be following up on the matter with his “friends” in Beijing and that Jacobs should consider the matter carefully before presenting it to Sands’ top brass. In his suit against Sands, Jacobs claims to have voiced concerns over Alves’ propriety to Sands boss Sheldon Adelson, but Adelson insisted Alves be retained as outside counsel. Regardless, Alves parted with the company in early 2010, and Jacobs was let go in July of that year, after which Alves was promptly rehired. At the time, Jacobs’ dismissal was blamed on his inability to keep quiet on matters concerning expansion into the Japanese market.

Sands is still waiting on approval to sell those luxury apartments, and its case against Hao remains an ongoing concern, as does its legal fight with ex-employee Jacobs and the joint probe by the US Securities and Exchange Commission and Department of Justice regarding potential violations of the Foreign Corrupt Practices Act. Speaking at the University of Macau last month, Gambling And The Law columnist/lawyer I. Nelson Rose said one of the downsides of the US companies taking root in Asia was the importation of US “lawsuit culture.” Rose noted that American operators had brought necessary innovation to Macau’s formerly stagnant casino climate, “but Americans bring more than innovation. They bring lawsuits.” Court adjourned.