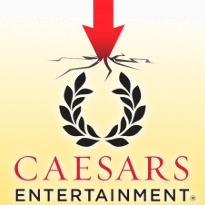 Casino colossus Caesars Entertainment Corp. saw net revenues rise 4.3% in Q1 2012, but that wasn’t enough to put the company into the black. Despite net revenues of $2.27b across its worldwide operations, Caesars posted a $280.6m loss for the quarter – nearly twice the $147.5m loss in the same quarter the previous year. Dragging down the numbers was a $172m charge related to an aborted project in Biloxi, Mississippi, which the company credits/blames for a 65% drop in operations income.

In a statement accompanying the results, Caesars chairman/CEO Gary Loveman trumpeted the influx of international visitors to its Las Vegas properties as helping keep the company’s finger in the dyke. Vegas net revenue rose 6.2% as visits to Caesars’ Vegas properties rose 5.9%, although customers spent 1.7% less per trip. Overall, visits to Caesars US’ properties rose 1.4%, while spending per visit fell 1%. Results from its Louisiana/Mississippi operations were up 6% to $303.4m and the Iowa/Missouri region was up 2.7% to $182.2m. To no one’s surprise, Caesars’ revenues in Atlantic City fell 3.7% to $432.5m. In fact, about the only really positive news coming from AC was the $17m property tax refund Caesars recently negotiated with city officials. Caesars international operations were up 5.3% to $132.7m while the three Indian-owned/Caesars-managed casinos contributed $11m (+4.8%) to Caesars coffers.

Revenues from ‘other’ sources, including online division Caesars Interactive Entertainment (CIE), rose from $20.6m in Q1 2011 to $64.7m in 2012, reflecting last May’s acquisition of online social game developer Playtika. Revenues may have been up, but ‘other’ still reported a net loss of $51.9m, although that’s an improvement over the $61.9m loss in 2011. (On a post-earnings conference call with investors, Loveman compared Playtika to his early love life: “A lot of effort, not a lot of results.”) The company realized a paper gain of $45.8m from paying down debt early, but an 18.7% rise in Q1 interest expense on the company’s total $19.79b debt played a far greater factor in Caesars’ overall decline. The company touts its implementation of ‘Project Renewal,’ a cost-cutting program designed to streamline operations that the company hopes will reap benefits down the road. But unless that project can find ways of cutting billions rather than mere millions, one should expect more red ink for Caesars’ foreseeable future.