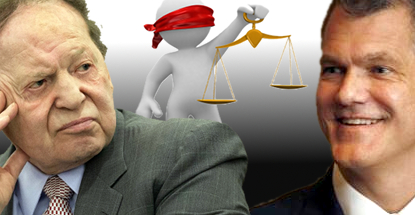 On Friday, District Court Judge Elizabeth Gonzalez ruled that there was sufficient cause to hear Jacobs’ lawsuit in Nevada. Adelson had argued that Sands China was a distinct entity from Las Vegas Sands and thus Macau had jurisdiction. Jacobs countered by producing evidence showing Adelson’s extremely hands-on approach to his Macau casinos.

Gonzalez said Jacobs’ attorneys had convinced her that Adelson and Las Vegas Sands exerted a degree of control over Sands China that “goes far beyond the ordinary relationship of parent and subsidiary.” Gonzalez said Adelson and LVS COO Michael Leven had been managing Sands China both before and after its first Macau casino opened.

Adelson plans to appeal the ruling, as his lawyers have done at every opportunity since Jacobs was abruptly sacked in 2010. Gonzalez noted the number of years the case had taken to get this far and believed “judicial economy would be served” by letting Nevada courts have at it, already.

Adelson claims Jacobs was fired because he became drunk with power. Jacobs says he was fired for objecting to criminality involving Adelson, Sands China, Chinese politicians and a reputed Triad figure who was a regular in Sands’ VIP rooms. Adelson had hoped to avoid having court reporters live-tweeting fresh details of these allegations to the world.

If Jacobs can prove some of his more salacious allegations – like how Adelson okayed a ‘prostitution strategy’ at Sands China hotels or used cash to grease the wheels of Chinese bureaucracy – Nevada gaming regulators could theoretically yank Sands gaming license. But Sands has been down similarly scandalous roads before and emerged only slightly poorer.

Still, if this case ever does get to court, Adelson’s performance should be popcorn-worthy. The hearing to decide jurisdiction saw Adelson take the stand on multiple occasions and his performance got a little nuttier with each successive appearance, including unprompted asides about his top execs getting fat off Adelson’s financial teat.

Adelson was openly contemptuous of Jacobs’ attorneys, answering questions with questions when he answered at all. Adelson vigorously disputed whether the attorneys had the right to certain questions and earned a tart rebuke from Gonzalez when he failed to obey her instruction to answer the damn question already.