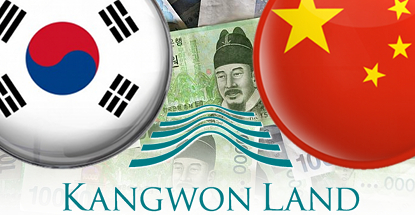 South Korea could issue up to three more casino licenses on Yeongjong Island near Incheon International Airport. So sayeth a report by Standard Chartered Equity Research, who ultimately foresee a cluster of up to five integrated resorts within spitting distance of the country’s largest airport, 30 miles south of Seoul. The report says the government will reveal its plans before the year is through.

The two projects already approved for Yeongjong include the $1.7b joint venture of Paradise Co. and Sega Sammy, set to open in early 2017. The other joint venture has Caesars Entertainment teaming up with Indonesia’s Lippo Group and an unidentified third party on a $2.2b project due to launch in 2018. Genting Singapore appeared to have a project in the works on Jeju Island, although the new provincial governor doesn’t seem all that happy about it.

Last month, Las Vegas Sands offered South Korea a deal: drop its longstanding insistence on a foreigners-only model and Sands would build some ‘iconic architecture” on the site of Seoul’s 1988 Olympic Stadium (now a baseball park). Sands pitched its project as a magnet for international MICE (meetings, incentives, conferences and exhibitions) as well as a “major tourist attraction.”

AMAZING WHAT THE STROKE OF A PEN CAN ACCOMPLISH
Support for allowing locals in casinos may be dubious but boosting tourism is a major government priority. The Korea Institute for Industrial Economics and Trade say the country expects to welcome 6m Chinese tourists this year, a significant gain on 2013’s 4.3m. The Institute says these Chinese tourists were worth KRW 13.4 trillion (US $12.8b) to the economy and ensured the jobs of 126k individuals, including many casino workers.

A Hana Daetoo Securities report said Chinese gamblers currently account for 43.2% of overall South Korean casino revenue but this share is expected to hit 67.5% by 2020, when those flashy new integrated resorts are up and running.

In April, the Yangyang International Airport in Kangwon province was granted transfer airport status; meaning tourists didn’t need visas so long as they kept their stay shorter than 72 hours. In July, this waiver’s duration was extended to 120 hours. Yangyang, previously known as the “ghost airport” due to its lack of use, saw the number of non-Korean arrivals more than quintuple in the first nine months of 2014. China accounted for 98% of these 152k arrivals.

Ironically, Yangyang happens to be a principal route to Kangwon Land, the only one of South Korea’s 17 casinos allowed to admit local residents. Earlier this month, KDB Daewoo Securities reported that Kangwon Land’s number of Chinese gamblers, “while still small, is rapidly rising.”

In fact, the monthly average of foreign visitors doubled year-on-year to 1,600. While it caters to locals and offers non-gambling options such as skiing, Kangwon Land’s complement of 200 gaming tables includes eight foreigner-only (and presumably very busy) mass market tables.