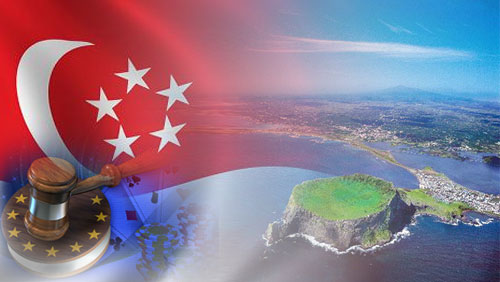 “We have to first establish an effective regulation and taxation system before starting discussions on whether to open or repeal new casinos,” Won said.

The proposed regulation calls for strict policies, stricter inspections and thorough reviews of casino license applications by foreign operators. It’s a similar format to the one Singapore used when it lifted its ban on gambling back in 2005. Gov. Won wants to implement something similar that also creates a new taxation system to help streamline foreign investments in the island.

Part of that plan aims to take advantage of foreign investments that have been made on the island, specially from foreign Chinese companies. Growing land ownership by the Chinese has given rise to concerns that the real estate investment visa system that was implemented in 2011 needs to be revised. New Politics Alliance Democracy Rep. Min Hong-chul said that Chinese investment in Jeju has grown sharply since 2010. “5.9 million square meters of land, or 43% of total land owned by foreigners, is owned by the Chinese,” Min pointed out.

Lawmakers understand the benefits of these projects in bringing foreign capital to the local economy; it has come to the point where it’s growing too fast and it’s resulting in what NPAD lawmaker Lee Mi-kyung describes as “reckless development”.

That’s one of the reasons why Governor Won takes this position. He’s indicated his plans to raise property prices and the qualifications needed to secure a permanent resident visa while also creating new and stricter policies for land development projects and restrict investments related to accommodation facilities and casinos.

“The casino industry needs restructuring to attract sound investment and ensure transparent operations to tackle illegal foreign capital outflow,” Rep. Lee Un-ju of the NPAD added. “The casino supervisory body proposed by Jeju governor will have to go through consultations with the central government.”