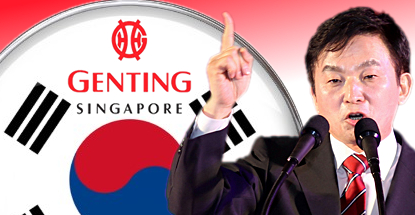 The future of Genting Singapore’s $2.2b South Korea resort casino project is in doubt after recent comments by the governor of the island on which the property is to be built. On Monday, Korea Bizwire quoted Won Hee-ryong (pictured), governor of the Jeju Special Self-Governing Province, saying there had been no mention of any casino in the development application filed by Genting and its Hong Kong partner, Landing International Development Ltd., and thus no authorization to build a casino had been granted.

Genting and Landing Intl., acting under the joint venture banner of Ramjung Jeju Development Corporation, had announced their project with great fanfare in February, but that was before Won took office in early June. Later that month, the planned groundbreaking was delayed at the last minute over what Genting said was their need to bring Won up to speed on the project. Genting tentatively rescheduled the groundbreaking for sometime in the third quarter, but that now appears overly optimistic.

Speaking on a radio talk show last Thursday, Won said he wasn’t “opposed to the gambling industry in principle.” But Won noted that there were already eight smaller casinos on the island and measures to properly manage the casinos’ “side effects” needed to be developed, and this will take time. Won said his administration needed to work with the central government to “create a supervisory body for casino operations in the province.” Won estimated this would take “at least six months or one year.” Only then would Won be able to decide “whether to give permission to [Genting’s] casino application.”

Won also questioned the feasibility of the project, which, barring any change to the law preventing Koreans from entering any casino that isn’t Kangwon Land, will rely on a steady stream of Chinese tourists to keep the lights on. Won suggested that “calling for economic revival through more casino businesses without legal and institutional change is like looking for pie in the sky.”

Won’s position was echoed by his deputy governor Park Jung-ha, who said the province earned “only 3% to 7%” of casino gambling revenue via taxes due to “sales figure manipulations.” Park said there was “no point in welcoming more operators” unless the province could design “an institutional device to keep strict control of the casinos in their finances.”

Won’s comments aren’t likely to sit well with the central government, which only days before had announced it was looking to lower regulatory hurdles for international casino developers, not put fresh roadblocks in their paths.