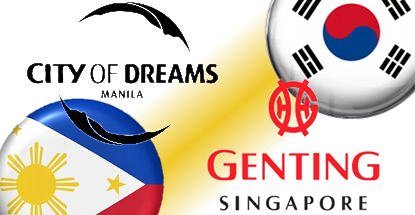 The Philippine division of casino operator Melco Crown Entertainment is looking to raise up to US $129m after significantly boosting the budget of its City of Dreams Manila resort casino. On Wednesday, Melco Crown (Philippines) Resorts Corp. suspended trading in its shares on the local exchange as it announced it was boosting the casino’s budget to $832m – an increase of 22%. This followed a similar announcement in October that expanded City of Dreams’ budget by 10% to $680m.

Melco Crown plans to raise the funds via the sale of up to 485m shares in its Philippines unit. A company filing stated that the budget boost was approved by a special meeting of the board of directors on Wednesday. No reason was provided for the increased spending, so we’ll suggest it’s to build a special anti-Godzilla wall in Manila Bay that will protect City of Dreams but leave the other three Entertainment City casinos exposed. City of Dreams is set to open in October featuring 365 gaming tables plus 1,680 slots and an equal number of electronic table games (ETG).

A little further north, Genting Singapore has announced it will delay the groundbreaking on its South Korean resort casino project. Genting had planned the ceremonial spade-turning for June 24 and had already issued invitations to dignitaries and the media. On Thursday, Genting said it was rescheduling so they could bring the newly elected governor of Jeju up to speed on their casino development plans. Today Online reported that the new groundbreaking date is tentatively set for sometime in the third quarter of this year. Resorts World Jeju, which Genting is developing in partnership with Chinese property firm Landing International Development, is scheduled to open for business in 2017.