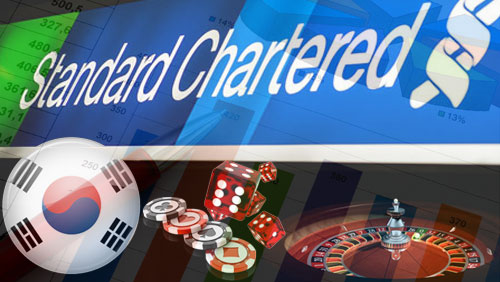 Standard Chartered analysts Tyler Ahn and Philip Tulk are confident that there is room for growth in the country’s burgeoning casino market, specifically casinos that only cater to foreigners. According to the Tul and Ahn, it’s not out-of-reach to think that gross gaming revenue from these establishments could quadruple by 2020 from last year’s $1.3 billion. South Korea currently has 17 small-scale casinos, including Kangwon Land, the only casino where locals are allowed to gamble.

Once the three, large-scale casino projects in the country, such as Resorts World Jeju, the Paradise-Sega Sammy joint venture in Incheon, and the Caesars-Lippo Group tie-up in Yeongjong Island, open their doors to the public, their combined gross gaming revenue could catapult South Korea into the third biggest gaming market next to Macau and Las Vegas. The Paradise-Sega Sammy project is scheduled to open in early 2017, followed by the the Caesars-Lippo Group project a year later and the Resorts World project in 2020.

South Korea’s close proximity to mainland China is seen as a big catalyst for growth of the Korean gaming market. Chinese visitors have flocked to its Asian neighbor in recent years, climbing from 1.3 million visitors in 2008 to 4.3 million last year. In fact, China has exceeded Japan as Korea’s biggest source of tourists.

The government’s plan to ease regulations for integrated resorts, which could come as early as next year, could pave way for another project in Incheon, further boosting the country’s gaming market.