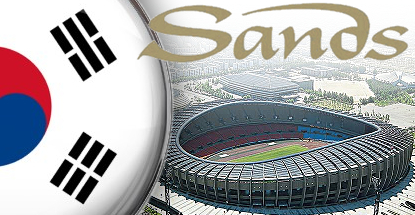 Casino operator Las Vegas Sands is getting more specific about its plans for an integrated resort casino in South Korea. On Tuesday, Sands managing director of global development George Tanasijevich told the Yonhap news agency that Sands has approached the government about erecting a “truly iconic building” near the site of the 1988 Olympic Games’ Jamsil stadium (pictured) in the country’s capital Seoul.

Sands has expressed interest in South Korea before, but only in broad terms as one of the many Asian jurisdictions in which it was considering setting up shop. In July, the Korea Herald reported that Sands was eying a parcel of land currently occupied by the Korea Electric Power Corp (KEPCO), which is relocating to other digs. The property is expected to go up for auction later this year.

Tanasijevich said Sands was “very interested” in building a “world class” integrated resort that would make South Korea “a world leader in developing the MICE (meetings, incentives, conferences and exhibitions) business.” Tanasijevich, who also serves as CEO of Marina Bay Sands (MBS) in Singapore, promised its Seoul resort would boast similarly “iconic architecture” that would become, like MBS, “a major tourist attraction” for South Korea.

Sands has proposed moving the stadium – currently used for baseball – to another location “to optimize the redevelopment of the Jamsil site” into a “leading international MICE destination.” Tanasijevich suggested a relocated, rebuilt “40,000-seat dome” would solve “a critical need for a year-round facility” for sports and other events in Seoul.

However, in order to justify the expense that this flurry of construction would incur, Tanasijevich wants to see South Korea lift its prohibition on locals entering casinos. South Korea has 17 smaller casinos currently in operation and several larger resorts in development, but all but one – Kangwon Land – are restricted to holders of foreign passports. Sands has made similar conditions a prerequisite for its entry into other Asian markets, such as Vietnam, which are slowly coming around to Sands’ way of thinking.

Tanasijevich said allowing local access to casinos was ”critical” to the project and “a necessary element for our business model.” However, Tanasijevich offered reassurance that Sands wasn’t seeking “a totally ‘open’ casino” environment but suggested a Singapore-style entry levy and/or the ability to demonstrate certain financial benchmarks would provide “appropriate entry barriers.”

Quite apart from addressing the scale of Sands’ ambitions, Tanasijevich insisted none of the other large-scale projects currently under development would have an easy time attracting sufficient international clientele unless the prohibition on local entry was scrubbed. Foreign would-be casino patrons “will be suspicious and the positive environment will not be created” if Koreans aren’t allowed entry.