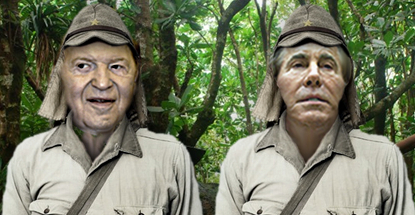 Wynn Resorts chairman Steve Wynn and Las Vegas Sands chairman Sheldon Adelson each took their turn at center stage during this week’s Global Gaming Expo (G2E) in Las Vegas. In between mutual logrolling of praise for each other’s work, they also reiterated their shared opposition to online gambling. Like two Japanese soldiers left behind on Guadalcanal, they continue to fight a war neither one realizes their side lost a long time ago.

Steve took the G2E stage on Tuesday and, when asked by an audience member what he thought about online gambling, his deadpan reply was “not much.” Wynn said he’d had advisors warn him that he needed to “spend $30m or $40m” building an online gambling presence or “be left behind.” And while Wynn’s infamous pre-Black Friday dalliance with PokerStars could have made some bee-yootiful babies, Steve ultimately decided online gambling wasn’t for him.

Later, Steve expounded on these views in an interview to CNBC, saying he didn’t see a role for private operators in the US regulated online gambling market. Wynn said state lotteries were “crying and starved for revenue” and would “hijack that business. It won’t be a private enterprise thing.”

Even if he’s on the outside looking in, Steve fears becoming collateral damage from the oft-cited but little-documented alleged perils posed to society by online gambling. Steve, who has previously described detailed briefings by online security specialists as “bullshit,” believes “something will go wrong with kids underage gambling.” The regulatory fallout from this something will “spill over” onto brick-and-mortar operators, who will be “victimized by some politician with his head up his butt.” This was “heartburn we don’t need. I’m not interested in it and I don’t support it.”

ADELSON TROTS OUT THE ANTI-ONLINE GAMBLING HITS
Wednesday was Adelson’s turn on the G2E stage. With Wynn watching from the audience, Adelson insisted that it was still possible to cram the online gambling genie back into the bottle. Despite being a top Republican sugar daddy, Adelson dismissed talk of states’ rights because he believes the borderless nature of the internet makes online gambling a federal issue.

Like Wynn, Adelson is convinced that an enterprising three-year-old can circumvent any online gambling operator’s security protocols, despite the fact that no such Raffi-loving mini-hackers have yet to emerge in any of the three US states currently offering some form of online gambling. Meanwhile, plenty of young ‘uns continue to elude the elaborate security precautions at Adelson’s Sands Bethlehem.

Adelson even found time to equate online gambling with his equally ill-informed crusade against reefer madness. Despite reams of medical evidence to the contrary, Adelson maintained that marijuana is a ‘gateway’ drug and that gate needs to be slammed shut, preferably on an online gambling operator’s head.

When he wasn’t rescuing children, Adelson was slamming online operators. Adelson obliquely referred to Caesars Entertainment’s embrace of online gambling as a desperate bid to pull their financial asses out of the fire. As for whether Amaya Gaming’s acquisition of PokerStars and Full Tilt had scrubbed the dirt off the online sites’ regulatory hands, Adelson said they were the same companies with new shareholders and thus they were still criminals.

All told, outside of Adelson’s opinion that Amaya CEO David Baazov‘s checkbook cannot magically turn water into wine, neither Adelson nor Wynn covered any new online gambling ground at G2E. Like stranded Japanese soldiers, they disregard all evidence that conflicts with their pre-existing beliefs as a clever enemy ruse designed to get them to surrender. While each man is owed his due for the casino empires they’ve constructed, it’s a pity that the same vision that led them to explore new territories like Macau turns so myopic when it comes to the realities of online gambling.