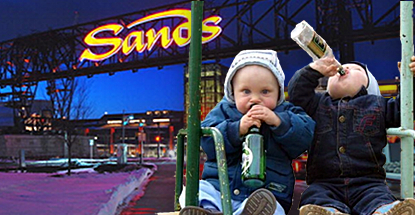 Las Vegas Sands’ Pennsylvania casino has been caught allowing underage patrons to gamble, the fifth time in five years state gaming regulators have had to sanction the market-leading Sands Bethlehem over this issue. The Pennsylvania Gaming Control Board announced the infractions last month and has now fined Sands $85k for six separate instances in which persons under the age of 21 years – including two 17-year-olds – were allowed to wager and drink alcohol on Sands’ casino floor.

Wednesday’s fines – which bring Bethlehem’s total penalties over the years to $305k – are all the more embarrassing given Sands chairman Sheldon Adelson’s campaign against online gambling, which he regards as incapable of screening out underage patrons. The Morning Call quoted Sands attorney Fred Kraus stressing the volume of underage patrons Sands hadn’t allowed to gamble, saying the casino had “a robust program. But human beings being human beings, mistakes are made.”

Another example of human error was uncovered this week after campaign finance reports revealed that Adelson had gifted $1m to a political action committee seeking to re-elect Pennsylvania Gov. Tom Corbett. By law, Pennsylvania casino operators are barred from making such donations, but like the 17-year-olds who gamble at his casino, Adelson appears to have made the donation using a fake ID.

The Republican Governors Association (RGA) was the single biggest contributor to Corbett’s last campaign and is on pace to re-earn that mantle this time around. On Dec. 31, Adelson donated $1m to the RGA, which promptly donated $987,844 of Adelson’s largesse to the RGA Pennsylvania 2014 PAC. The Philadelphia Inquirer quoted Sands spokesman Ron Reese saying Sands had made it “crystal clear from the beginning” that Adelson’s contributions weren’t to be used in Pennsylvania. RGA spokesman Jon Thompson says his group has since transferred the nearly $1m out of the Pennsylvania account.

This really has not been Adelson’s week. Adelson was a major financial backer of US House Majority Leader Eric Cantor in recent election cycles, but Adelbucks couldn’t prevent Cantor from becoming the first Majority Leader in history to be defeated in a primary contest on Tuesday night. Cantor has announced he has no intention of running against rising Tea Party star David Brat as a write-in candidate in this November’s elections, leaving Adelson without one of his key anti-online gambling allies on Capitol Hill.