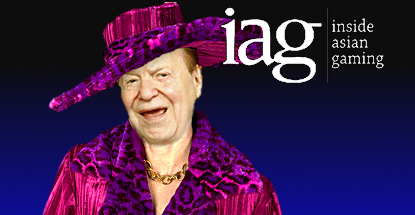 Inside Asian Gaming has published its latest list of the Asian gaming industry’s 50 biggest movers and shakers. Las Vegas Sands honcho Sheldon Adelson (pictured) retains his place atop the list, reflecting the 81-year-old’s undisputed position as titan of the world’s largest gaming company. The whole list, complete with detailed bios, is available here.

Genting’s Lim aside, Macau-based operators account for the entire top-10, but Alvin Chau stands out at in seventh place as the chairman of mega-junket operator Suncity Group, making Chau the only top-tenner not representing any single casino concessionaire. The next highest junket operator is Neptune Group CEO Nicholas Niglio at #18.

Universal Entertainment chairman Kazuo Okada saw the most dramatic rise, leaping from 2013’s #22 all the way to #11, despite a year that saw his already troubled Philippine resort casino project lose its local partner. Trouble in the Philippines caused last year’s #20, Global Gaming Asset Management’s William Weidner, to fall off the list entirely due to his falling out with the operators of Solaire Resort & Casino, whose sacking of last year’s #30 Michael French also caused French to drop of the charts.

Other notable gainers include Genting Malaysia Bhd president Lee Choong Yan, who went from #28 to #17, reflecting the massive upgrade Genting is bestowing upon its Resorts World Genting property, which now has the second highest EBITDA margins in the business, behind only Singapore’s Marina Bay Sands. Tony Fung, whose Aquis Reef Holdings has been aggressive about expanding into Australia, jumped from #50 to #37.