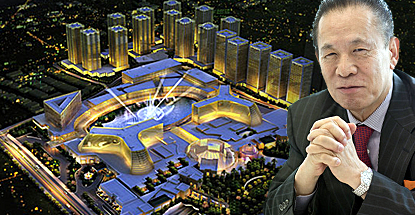 The company building Japanese billionaire Kazuo Okada’s $2b resort casino in the Philippines says the launch of the project’s first phase could come as early as the end of 2015 or as late as the end of 2016. On Wednesday, execs from Tiger Resort Leisure & Entertainment (TRLE) updated local media on the progress of the venue being developed in Manila’s Entertainment City.

TRLE director Maxwell Steele Zetlin acknowledged that “everyone’s so worried about ‘when are we going to open’” but insisted that the timeline for completion remained “whatever the amount of time it takes” to realize Okada’s vision. TRLE exec VP Matt Hurst insisted that delays weren’t necessarily a bad thing, as it would give TRLE time to scope out the competition and adjust as necessary.

Bloomberry Resorts’ Solaire Resort & Casino has been open for over a year now while Melco Crown Entertainment’s City of Dreams Manila is set to open its doors later this year. The fourth and final Entertainment City property, Bayshore City Resorts World, isn’t scheduled to launch until 2018.

The TRLE project faces obstacles the other operators have managed to avoid. TRLE, a subsidiary of Okada’s Universal Entertainment, has yet to identify a new local partner following the demise of its original agreement with Century Properties Group (CPG). Philippine law limits international firms’ land ownership rights to 40% of any project, necessitating partnerships with local companies. CPG has indicated it’s open to a reconciliation but TRLE has yet to accept CPG’s extended hand.

On Wednesday, TRLE execs insisted Okada (pictured) was “working very hard” to find a suitable local partner. Hurst said Okada was “talking to people who are interested.” Local gaming regulator PAGCOR has repeatedly reminded TRLE that their project won’t be allowed to proceed without first identifying a local partner. There’s also the small matter of the unresolved criminal charges hanging over Okada’s head stemming from alleged bribery of local officials to secure concessions relating to the Manila Bay Resorts project.

Assuming the project actually opens, the first phase will feature two hotels with 500 rooms each and a gaming floor boasting 500 tables and 3k slot machines. The second phase will focus on the property’s non-gaming amenities. TRLE expects 75% of its business to come via international customers, particularly those from other Asian countries, the United States and Australia.

Hurst said Okada’s “fantastic vision” for Manila Bay Resorts would “stamp his mark” on the country’s casino gaming industry. Zetlin sketched out some of the property’s more striking design elements, including a 10k-square-meter, 30-meter-high glass dome that will house Manila’s first “beach club.” The dome will offer “all the fun of being outside without the UV rays.” The property will also feature a 20k-square-foot pool and fountain “larger than the Bellagio fountain in Las Vegas.”