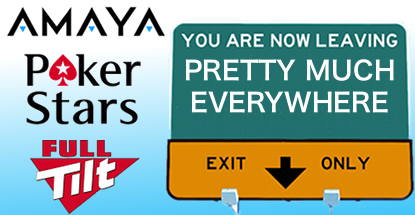 Online poker sites PokerStars and Full Tilt have withdrawn their services from a host of ‘grey’ markets as new owner Amaya Gaming looks to burnish Stars’ regulatory reputation ahead of its expected return to the US online gambling market. On Tuesday, poker forums began filling up with reports from players in a variety of countries, many of them in Asia, Africa and the Middle East, saying their access to the poker sites had been curtailed effective immediately.

PokerStars assured customers in these countries that their balances are safe and can be withdrawn at their convenience. Emails sent to Stars players claimed the decision was made following a recent review of its operations, something the company says management routinely conducts “with independent 3rd party professionals to assess the business risks and opportunities for our brands on a market-by-market basis.”

The timing of the announcement coincides with the original Oct. 1 deadline for implementation of the UK Gambling Commission’s new licensing regime, although this has since been pushed back one month. Part of the UK’s new regime involves requiring UK-licensed operators to legally justify their presence in any market from which the company derived 3% of more of its overall revenue.

However, since many of the countries Stars and Tilt have now blocked likely didn’t approach the 3% threshold, other factors must be considered, particularly the fact that Amaya is currently awaiting word on its application to commence operations in New Jersey’s regulated online gambling market. A return to US shores three-and-a-half years after the Stars and Tilt brands exited the US following the Black Friday indictments is key to Amaya’s vision for how it will earn back the $4.9b it paid to acquire Stars and Tilt earlier this year. With hedge fund managers breathing down its neck, Amaya clearly doesn’t want to risk blowing its best shot at establishing a US toehold.

Notable by its absence from Amaya’s new list of no-go zones is its home territory of Canada. Stars has previously insisted that it has no plans to exit the Canadian market, but then again, Stars reps insisted shortly after the takeover that the site planned to stay in “all current markets,” and that ship has obviously sailed.

Amaya is reportedly close to working out some kind of partnership with Québec’s provincial lottery corporation that would allow it to remain active in the province. However, any such deal wouldn’t apply beyond Québec’s borders and the ‘mind and management’ provisions of Canada’s Criminal Code continue to frown on Canadian-facing operators who base themselves on Canadian soil. So Canadian ‘Dear John’ letters are likely on the way sooner rather than later. One thing is for sure: the former privately held Stars is slowly being remade in Amaya’s publicly traded image.