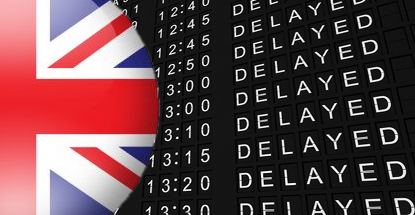 The UK will delay implementation of its new online gambling licensing regime by a month pending the outcome of Gibraltar’s court challenge of the UK law. On Thursday, the UK Gambling Commission (UKGC) posted a notice on its site saying the scheduled Oct. 1 implementation of the Gambling (Licensing & Advertising) Act 2014 would be pushed back to Nov. 1 to “allow a judgment to be made without undue time pressure” on the judges considering the challenge.

The UK’s new laws requires all online operators wishing to take wagers from and promote their services to UK punters to hold a UKGC-issued license. As of Dec. 1, these operators will also be required to pay a 15% point-of-consumption tax on all wagers placed by UK punters. The Gibraltar Betting and Gaming Association (GBGA) has rubbished the UK’s claim that the changes are intended to protect consumers, accusing the UK of using the consumer protection issue as cover to raise additional revenue, something forbidden under European Union trade edicts.

This week saw the GBGA make its legal case before the UK High Court. In a two-day hearing, the GBGA attacked the UK’s “discriminatory” regime as a “disincentive to companies” continuing to base their online operations in licensing jurisdictions like Gibraltar, the Isle of Man, Alderney and Antigua. The GBGA argued that, far from protecting consumers, the extra costs imposed on operators would be passed on to consumers, encouraging them to seek out better offers via sites licensed outside the UK, thereby defeating the whole stated rationale behind the new law.

The second day saw the UK’s advocates reject Gibraltar’s right to claim injury, given that the UK doesn’t believe EU trade edicts apply to trade between the UK and Gibraltar. The UK said the added costs to operators could “easily be absorbed” and dismissed GBGA’s claims to the contrary as “more hot air from a trade association that wants to keep the current light touch regulation that it has.”

The proceedings wrapped with Lord Justice Green announcing that the Court was unlikely to reach a verdict ahead of Wednesday’s original timeline for implementation of the new law. The GBGA then asked the Court to impose a delay on the implementation, but this was rejected, only to have the Department of Culture, Media and Sport announce the delay the following day. A GBGA spokesperson told eGaming Review that the delay was evidence that the government was “beginning to understand the potential difficulties into which they have been put by the [UKGC].” The legal changes have prompted a number of operators to quit the UK market ahead of the Oct. 1 deadline.