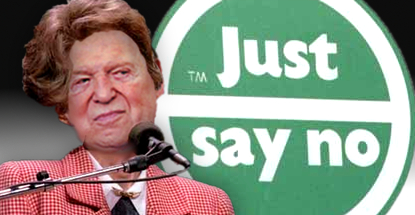 Las Vegas Sands chairman Sheldon Adelson may be having difficulty finding support on Capitol Hill for his anti-online gambling efforts, but he’s garnered an ally in the US corner store lobby group. Yes, America’s primary purveyors of carcinogenic cigarettes and artery-clogging pork rinds have thrown their support behind Adelson’s bid to stuff online gambling in a time capsule dated ‘Do Not Open Until… Ever.’

On Tuesday, the National Association of Convenience Stores (NACS) urged Americans to contact members of Congress to pressure them into supporting the Restoration of America’s Wire Act (RAWA) introduced into both House and Senate in March. The NACS aren’t new to this game, having supported previous congressional efforts by Senate Majority Leader Harry Reid and former senator Jon Kyl to roll back the hands of time.

The NACS fears online poker a whole lot less than it does online lottery tickets, which it believes will cut into its over the counter sales (despite evidence to the contrary). Nonetheless, to focus on this naked self-interest wouldn’t do, so the NACS is parroting Adelson’s alleged concerns about kids gambling online, although the notion that any kid who somehow managed to elude all the significant digital roadblocks preventing him or her from gambling online would then opt to buy lottery tickets is about as likely as Adelson booking a holiday in Iran.

ADELSON TO FLORIDA: JUST SAY NO TO MEDICAL MARIJUANA
Ever the busy beaver, Adelson is expanding his list of progressive causes he’s keen to sabotage. On Tuesday, campaign finance report filings revealed that Adelson had cut a $2.5m check to the Drug Free Florida Committee, which hopes to block legalization of medical marijuana in the state. The issue will be on November’s ballot and despite most Floridians expressing support for the constitutional amendment, state Republicans are hell bent on ensuring that cancer patients continue to risk arrest in order to alleviate the aftereffects of their chemotherapy.

Adelson has a son from a previous marriage that has struggled with drug dependency, while another son died as the result of drugs. Adelson had his own struggles with methadone following neurological treatment he received a decade ago and Adelson’s current wife Miriam is a doctor who specializes in addiction treatment. But none of this explains why a comparatively tame drug like marijuana – medical marijuana, in particular – has him so riled up.

For the past few years, Adelson and Sands have been cutting similarly large checks in a bid to convince state legislators to permit resort casinos in Florida’s major cities. Given the poor results of all this frantic check-writing, perhaps Adelson has formed the opinion that Florida pols are too high to understand the benefits resort casinos will bring to the state’s economy. All we can say is, pity the conflicted Florida convenience store owners when they realize they sell an awful lot more junk food when people have the munchies.