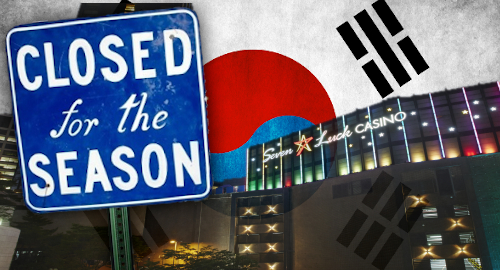 South Korea’s major casinos may be off-limits for the rest of the year as the country tries to deal with an unprecedented surge in COVID-19 cases.

On Monday, South Korea’s President Moon Jae-in issued a public call for more pandemic testing and better tracing as the latest batch of tests indicated a 4.2% positivity rate, up sharply from 1.2% average to date this year. New cases hit 631 on Sunday, the highest total since the pandemic’s initial wave this spring.

The surge in new infections will require more stringent social distancing limits, with the capital Seoul and surrounding areas subject to tough new rules through at least the end of this month. That spells more financial pressure for casino operators Grand Korea Leisure (GKL) and Paradise Co Ltd, both of which have venues in Seoul.

GKL previously estimated that the shutdown would cost the company around KRW5.5b (US$5m) in lost revenue, an ugly blob of red ink the company now pegs at KRW13.6b. All three casinos had been operating at only 20% of normal capacity due to pandemic limitations, resulting in November’s total sales falling by more than one-half from October, while sales were off nearly 88% from November 2019.

While GKL is state-owned, Paradise is a private operator, which may account for its resistance to shutting down completely. Its Paradise Casino Walkerhill venue in Seoul had been accepting guests provided they can provide evidence of a recent COVID-19 test showing a negative result, but it appears unlikely the government will tolerate this half-measure for long.

Kangwon Land, South Korea’s largest casino and the only one at which local residents can gamble, announced Monday that it would close its doors as of midnight Tuesday (8) as the country’s Level 2 pandemic mitigation strategy now applies to the region some 200km north of Seoul.

This marks the third closure this year for Kangwon Land, which only reopened to the public in October. The company said it had no idea when it might reopen and warned that its daily losses will be around KRW1b. Kangwon Land said last month that its net loss over the first nine months of 2020 stood at KRW242.5b versus a KRW282b profit in the same period last year.