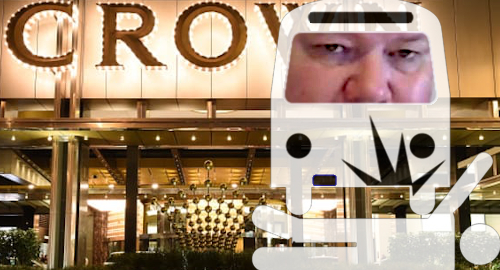 Packer’s first day testifying via video link from his yacht floating somewhere on the high seas saw him acknowledging ‘shameful’ behavior related to email threats he made to a private equity manager in 2015. Packer also revealed for the first time that he’s being treated for bipolar disorder.

On Wednesday, Packer threw senior Crown execs under the bus regarding the 2016 arrests of 19 Crown staff based in China for violating that country’s rules on promoting gambling services to mainland residents. Packer claimed he’d asked then-CEO Rowen Craigie and chairman Robert Rankin to investigate potential dangers prior to the arrests but that the execs had “let the side down.”

In early 2015, China warned gambling operators against trying to lure its citizens to foreign casinos and several months later arrested 14 South Koreans working on behalf of two Korean casino operators. Packer claimed Wednesday that the Korean arrests prompted him to query Craigie and Rankin regarding the safety of Crown’s China-based staff but no action was taken.

The inquiry previously heard of internal Crown emails from March 2014 warning of the dangers, but Packer denied having seen it prior to the 2016 arrests. Packer claimed that “in 2015 I thought China was a different place than it’s turned out to be.”

Packer also claimed that, while he knew that Crown’s NSW gaming license forbid the company from having any dealings with Macau casino icon Stanley Ho, he “didn’t give a thought” to those clauses when considering the sale of 20% of Crown’s stock to Melco Resorts & Entertainment (MRE), which is controlled by Stanley’s son Lawrence.

Packer admitted knowing that Great Respect, a Stanley-linked company, had a stake in MRE’s parent company Melco International Development, before he made the deal to sell the Crown stake to MRE. But he said he believed the attorneys tasked with clearing the sale would “cover all eventualities” before the deal was announced.

The inquiry previously heard from other Crown execs who expressed ignorance of the Melco-Stanley ties, partly because they didn’t bother to check. When the ILGA launched its inquiry, MRE backed out of its commitment to proceed with the deal and sold off the 10% Crown stake it had already acquired.

Packer also revealed that he’d sought Lawrence Ho’s input as to how Macau gaming regulators would view a potential merger between Crown and rival Wynn Resorts. Wynn broke off talks with Crown after word of their discussions leaked to the media in April 2019.

Packer and Lawrence had been joint venture partners in MRE’s predecessor Melco Crown Entertainment – which operated casinos in Macau – before Crown ditched its stake in 2017 to focus on its domestic resorts. Packer said he’d asked Lawrence how Macau regulators might view Crown’s return, given the arrests of its China-based staff.

An April 19, 2019 email from Packer to Lawrence expressed the belief that “Wynn will rebid if they are sure Macau regulatory approvals will be ok. So I’m hoping you could work your magic.” Packer’s stake in a merged Crown-Wynn entity would have been around 10%, and he felt he shouldn’t be “banned from having a 10% interest with no board representation.”

Packer also revealed that he and Lawrence initially discussed a Crown-MRE merger prior to the 20% share agreement, but that “it quickly got to the position of that didn’t suit him and that didn’t suit me.” Packer also agreed to let Lawrence out of the share purchase, despite the lack of legal triggers in their agreement, saying he “would never hold Lawrence to do something that he didn’t want to do.”

If the ILGA concludes that Crown’s behavior fails to rise to appropriately ‘suitable’ levels, Crown Sydney’s gaming license could be revoked. But most analysts expect Crown will get off with extra license conditions, particularly in terms of VIP gambling and anti-money laundering compliance.

Crown investors appear to concur with this theory. Having pushed the shares down following Packer’s initial day of testifying, Crown shares closed out Wednesday’s trading up nearly 3% to AU$8.97.