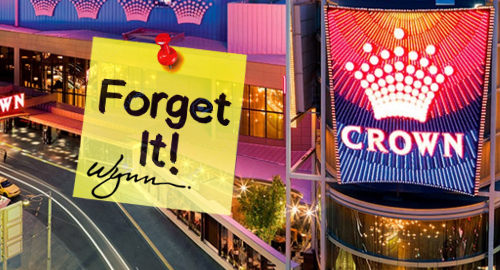 Talk of a potential union of two of the world’s largest casino operators has ended just as swiftly as it began.

Earlier on Tuesday, Australia’s Crown Resorts and America’s Wynn Resorts each publicly confirmed that the parties were having preliminary discussions regarding a potential blockbuster deal. Wynn was the obvious aggressor in this abrupt hookup, which would have involved a 50/50 cash-and-shares takeover of Crown in a deal worth around US$7.1b.

And just like that, it was over. Wynn issued a statement later on Tuesday saying that thanks to the “premature disclosure of preliminary discussions,” the company had “terminated all discussions with Crown Resorts concerning any transaction.”

The Wall Street Journal quoted a source saying that Wynn’s board had been caught off guard and more than a little miffed by Crown’s people talking to the media about the deal. Wynn’s initial release confirming the talks indicated that the company didn’t intend to comment further “unless required by law.”

Some analysts suggested that Wynn’s abrupt disengagement may turn out to be a negotiating ploy and that the parties may yet resume their talks. However, the fact that Crown appears so receptive to some sugar daddy coming along and sweeping it off its feet may encourage Wynn’s rivals to start serenading outside Crown’s window.

Crown has definitely seen better days, having seen its share price tumble in recent years following a spate of bad news that began with some high-level Crown execs being arrested in China for illegally promoting gambling. In February, the company reported its fiscal H1 profit was down more than one-quarter year-on-year as VIP gamblers gave Crown’s properties a wide berth.