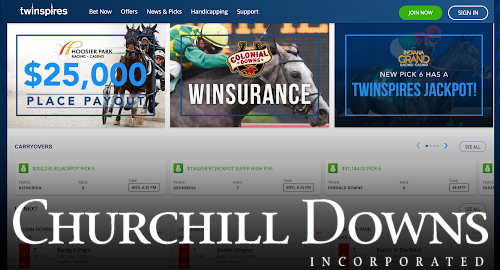 US casino and betting operator Churchill Downs Incorporated (CDI) leaned hard on its TwinSpires advance deposit wagering site after its land-based operations were shut by COVID-19.

While COVID-19 was obviously a factor in that red ink, the bulk of the loss came via discontinued operations, specifically, the $124m settlement ($95.4m after tax) in May with disgruntled customers of CDI’s former social casino unit Big Fish Games, which CDI sold to Australia’s Aristocrat Leisure in 2017.

As for continuing operations, CDI was forced to close its venues in March as the COVID-19 scythe swept across America. CDI has since reopened all its gaming venues save the Calder Casino in Florida, which reopened briefly only to be shut again earlier this month after Florida’s governor decided that COVID-19 could be handled merely by talking tough and kissing Donald Trump’s (presumably) orange posterior.

The shutdowns pushed CDI’s ‘Gaming’ revenue down nearly 80% to $37.3m and the casino division booked an earnings loss of $2m versus a $76.1m gain the year before. However, CDI says revenue and earnings at its wholly owned casinos were up 9% and 38%, respectively, on a year-on-year basis following their reopening in May/June.

COVID-19 also played hell with CDI’s land-based racing revenue, which fell 84.3% to $30.2m while earnings were off 96.3% to just $4.5m. The pandemic forced the postponement of the Kentucky Derby until September 5 and the halting of ‘historical racing’ at its Derby City Gaming venue at the Louisville track.

Thankfully, the Online Wagering division was firing on all cylinders in Q2, with revenue up 26.7% to $121.6m, while earnings shot up nearly three-quarters to $38.8m. Despite nationwide racing handle falling 19% in Q2, CDI’s TwinSpires ADW site saw handle jump 21.6% year-on-year.

CDI noted that TwinSpires’ ranks of active players were down 55.5% during Q2, which the company blamed on the Kentucky Derby’s absence, yet revenue per active player nearly tripled as “customers wagered more on the content that was available.”

CDI’s BetAmerica online gambling/sports betting brand added $1.3m to the Online Wagering revenue total, nearly twice the $700k it reported in Q1 2019. The gains came thanks to a full quarter’s activity in Pennsylvania and despite (a) the enforced downtime caused by the hacking of the brand’s technology partner SBTech, and (b) no sports on which to wager.

On Wednesday, CDI announced that BetAmerica had reached a deal to enter Michigan’s legal online gambling market through a partnership with the Hannahville Indian Community. Pending regulatory approval, BetAmerica will offer online sports betting and casino products statewide while also opening a retail sportsbook at the tribe’s Island Resort & Casino in Harris.