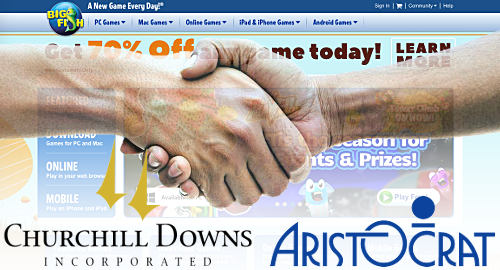 On Wednesday, CDI announced that it had reached a deal to sell Big Fish Games to Aristocrat subsidiary Aristocrat Technologies Inc. for $990m. The all-cash deal is subject to the usual regulatory approvals but CDI’s board expects the deal to close sometime in Q1 2018.

It was three years ago this month that CDI announced it had paid $885m to acquire the Seattle-based Big Fish Games. Many observers blinked hard at the notion of CDI detouring so far from its race betting roots, but Big Fish quickly became CDI’s biggest revenue contributor.

However, CDI’s most recent earnings report showed the social and mobile gaming division’s earnings tumbling due to rising user acquisition costs. In May, CEO Bill Carstanjen said social casino growth had “slowed and competition has stiffened” but insisted that Big Fish still had “a great deal of unreached potential.”

On Wednesday, Carstanjen said his company planned to “refocus our strategy on our core assets and capabilities including growing the Kentucky Derby, expanding the casino segment, TwinSpires.com and other forms of real money gaming, and maximizing our thoroughbred racing operations.”

CDI plans to use up to $500m of the sale proceeds for share repurchases, while the rest will go toward debt reduction and possible acquisitions to support organic growth.

Big Fish generated adjusted revenue and earnings of $458m and $83m, respectively, in the 12 months ending September 30. Aristocrat said it expects the deal to be earnings accretive in the first full year of ownership.

Aristocrat has been building its social and mobile gaming operations for years now, and recently paid $500m to acquire Israeli social gaming outfit Plarium. Had both Plarium and Big Fish been contributing to Aristocrat’s most recent fiscal year, the company’s digital operations would have accounted for 38% of its total revenue.

Aristocrat CEO Trevor Croker said his company was now “the second largest social casino publisher globally,” behind only Playtika, which was purchased by a Chinese consortium for $4.4b in August 2016.