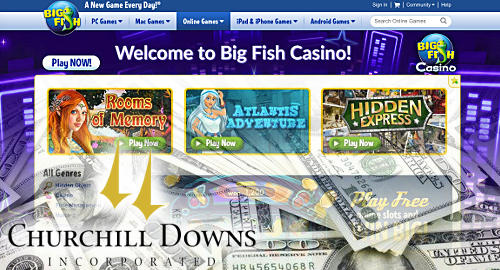 Churchill Downs Incorporated’s mainstay social gaming division posted larger profits but continued revenue declines that has analysts wondering if the division could be up for sale.

CDI recently released its Q1 earnings report, which showed revenue falling 3% to $279.5m, while adjusted earnings shot up more than one-fifth to $57.3m and net income nearly tripled to $7.3m.

CDI’s Big Fish Games social gaming operation reported revenue of $112m, around $10m less than Big Fish generated in the same period last year. While the social casino side suffered only a modest decline in bookings, the casual/mid-core free-to-play operations fell $11.2m to $43.8m, and premium game bookings slipped $5.1m to $20.7m as customers continued their shift away from PC to mobile games.

Social casino bookings were down $1m year-on-year to $46.4m, although this figure represented a $2m gain from Q4 2016. And despite the overall social gaming bookings decline, decreases in user acquisition costs (-$18.3m) and other expenses (-$3.2m) pushed the social gaming division’s adjusted earnings up more than double to $20.3m.

Viewed in that light, the social casino bookings decline appears more concerning, but Carstanjen insisted that CDI’s plan wasn’t to “simply chase booking for bookings’ sake, but rather to achieve profitable bookings growth.”

Carstanjen admitted that the social casino growth rate has “slowed and competition has stiffened as both major players and new entrants compete in this very attractive space.” But Carstanjen insisted that Big Fish “has a great deal of unreached potential.”

Carstanjen also suggested that CDI’s Jackpot City Slots brand “has been showing encouraging results and now is meaningfully adding to the bookings and other metrics of our social casino segment. We are cautiously optimistic we have a sustainable addition to our portfolio.”

Given the recent mega-sales of two US companies’ social casino operations – IGT’s DoubleDown Interactive and Caesars Entertainment’s Playtika – analysts wanted to know if CDI had any intention of selling Big Fish. Carstanjen deflected these suggestions, saying only that the acquisitions were a “nice validation of the attractiveness of the [social casino] space.”

OTHER VERTICALS A MIXED BAG
As for CDI’s other verticals, the TwinSpires.com online race betting business had a strong Q1, with revenue up $2.4m to $52.3m thanks to a 6.8% rise in betting handle. By contrast, CDI’s land-based race betting revenue fell $2.4m to $26.1m, with the shortfall blamed on a calendar shift in the Louisiana Derby and an outbreak of contagious equine disease that limited field sizes.

CDI’s land-based casino division reported a modest $1m revenue rise to $87.5m, while casino earnings nudged up a similar margin to $35.3m. Figures would have been higher but for continued declines at CDI’s Riverwalk casino due to lousy weather and increased competition in the Vicksburg, Mississippi market.

Carstanjen said construction on the recently acquired Ocean Downs casino in Maryland was continuing apace, and CDI expects the property’s new live table games will be taking wagers as of New Year’s Eve 2017.