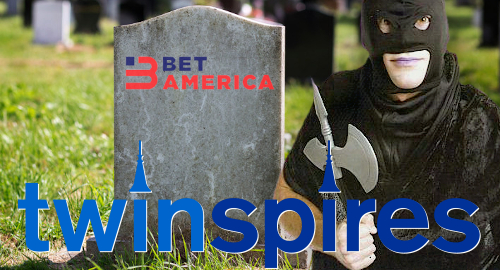 Gambling operator Churchill Downs Incorporated (CDI) is replacing its fledgling sports betting/iGaming brand with its far more established race betting brand as it tries to run with the big boys in the US online market.

On Tuesday, CDI announced that it was moving to “a single brand strategy for its online wagering segment,” which currently encompasses both the popular TwinSpires advance deposit wagering site and the far less familiar BetAmerica brand, which is currently operational in only six states.

Henceforth, TwinSpires will be the brand under which all CDI’s online gambling operations are conducted, starting with the expected launch later this month of CDI’s online sportsbook and iGaming platform in Michigan. After that, retail and online sportsbooks in Colorado, Indiana, Michigan, New Jersey and Pennsylvania will undergo a similar identity refresh.

CDI president/COO Bill Mudd said TwinSpires “has consistently delivered over 13 years” and this legacy “offers a unique point of difference in a competitive space.” Translated, that means CDI has belatedly realized that brand recognition is a major differentiator in the rapidly expanding US sports betting market and BetAmerica just isn’t gaining traction.

A single-brand strategy also promises to provide CDI with some “marketing efficiencies,” another key area of competition in a betting market dominated by the likes of such recognizable brands as DraftKings, FanDuel and BetMGM. And just as Penn National Gaming’s Barstool Sportsbook aims to capitalize on Barstool Sports’ built-in audience, CDI hopes to introduce TwinSpires’ racing aficionados on CDI’s other online products.

While BetAmerica turned modestly revenue-positive in CDI’s most recent earnings report, TwinSpires was setting records for both race betting handle and revenue. TwinSpires undoubtedly benefited from racing’s uninterrupted activity during the pandemic suspension of major sports leagues, but the site routinely outperforms the overall US racing market in terms of online handle.

In other CDI news, the company announced a flurry of executive shuffling shortly before Christmas. Former VP of operations Mike Anderson is now president of Churchill Downs Racetrack, replacing Kevin Flanery, who retired at the end of 2020.

Replacing Anderson as CDI’s VP of operations is Ryan Jordan, an 11-year CDI veteran who previously served as general manager of the racetrack. Meanwhile, Mike Ziegler will take over as GM of the track while retaining his current role as CDI’s exec director of racing while CDI conducts “a search to support Ziegler in that function.”