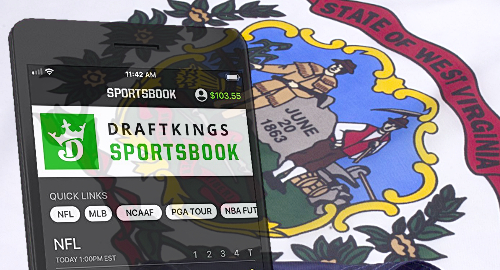 DraftKings has launched mobile sports betting in West Virginia, the second wagering app the state has welcomed this week.

This marks only the second state in which DraftKings has launched digital wagering, following the company’s highly successful launch in New Jersey. (This geographic tally doesn’t count DraftKings’ mainstay daily fantasy sports operations, which have taken on lesser significance as the company pursues single-game betting opportunities across the US.)

DraftKings’ archrival FanDuel went live with its West Virginia betting app earlier this week. FanDuel has also launched mobile betting in Pennsylvania, a status that DraftKings has yet to attain. FanDuel is also the undisputed digital betting champeen in New Jersey, so it will be interesting to see if a similar dynamic plays out in WV.

West Virginia’s bettors have been without a digital betting option since March, when the BetLucky app went dark after only a couple months of operation. The parties behind that app are currently arguing in court over its failure, meaning WV bettors shouldn’t hold their breath for the app’s imminent return.

That said, video of the Chinook’s Lounge that circulated online was greeted with more than a few dismissive comments, most of which centered on the sparsely decorated Lounge’s resemblance to a senior citizen center’s activity room.

Still, beggars (and bettors) can’t be choosers, and the tribal gaming venue was able to launch while the Oregon Lottery’s betting operation isn’t expected to arrive for a few more weeks. However, the Lottery’s SBTech-powered ‘Scoreboard’ product will initially arrive in digital form, while the Chinook product is strictly land-based.

ILLINOIS HAS QUESTIONS
The state of Illinois only passed its betting legislation in June and the state is renowned for slow-rolling any regulatory decisions, so local sports bettors will have to wait a while yet before they can get their hands on a locally licensed betting product.

In the meantime, the Illinois Gaming Board (IGB) has invited stakeholders – including operators, the general public and anti-gambling types – to submit comments on how it should regulate sports betting. The comment period will end September 27 and all comments will be publicly posted on the IGB’s website, so best keep the profanity to a bare minimum.

NBC’S AL MICHAELS SAYS ‘RASCALLY’ BETTING TALK WILL CONTINUE
Meanwhile, NBC Sports broadcaster Al Michaels – who’s renowned for his veiled betting references during NFL broadcasts – said this week that he would likely approach betting talk during this season’s Sunday Night Football broadcasts “the same way I’ve been doing it in the past,” which means, in Michaels’ own words, “being a bit of a rascal.”

However, Michaels suggested that NBC’s willingness to dicuss wagering on-air remained “the great unknown” and he couldn’t say “how it’s going to wind up at the end of the season.” Michaels said the question was not only how to incorporate betting into NBC’s broadcast, but “how this whole thing will work as [wager] probably gets [approved] in almost every state in the country.”

Sunday Night Football producer Fred Gaudelli suggested the program would limit betting talk to moments where it might provide extra insight, such as updating the Indianapolis Colts’ Super Bowl odds in the wake of QB Andrew Luck’s suprise retirement.