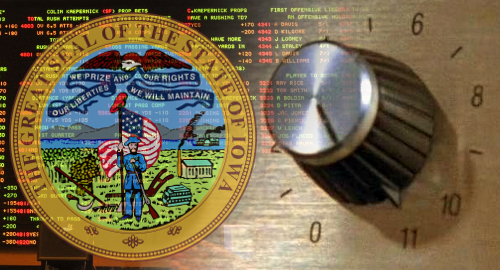 Legal sports betting is officially a reality in Iowa, marking the 11th state in the union to hop on the legalized wagering bandwagon.

Iowa’s legal wagering officially kicked off at noon on Thursday, with eight land-based casinos eligible to offer wagering on their premises and four of those venues also offering wagering on the go via mobile apps. Other casinos are expected to receive their wagering diplomas from the Iowa Racing and Gaming Commission any day now.

Iowa definitely took the fast lane to get to Thursday’s launch, as state legislators only approved their betting legislation in late April and Gov. Kim Reynolds didn’t sign it into law until mid-May. Considering how long some other states have taken to launch betting within their borders, Iowa’s progress was a model of efficiency.

The same can’t be said for the online betting sign-up process, which under the state’s rules can only be done in-person at a land-based casino. This cumbersome procedure will expire at the end of next year but, in the meantime, various political dignitaries were on hand Thursday placing ceremonial first wagers just to show how much fun it is to traipse on down to your local gaming venue and show someone your driver’s license.

Iowa has one of the friendlier regulatory environments for betting operators, including a 6.75% tax on betting revenue (similar to Nevada and a damn sight better than Pennsylvania’s 36%). Licenses cost a mere $45k and each casino is allowed to launch two online brands or ‘skins’ as all the cool kids are calling them.

Iowa is the first Midwest state to launch legal wagering but it most definitely won’t be the last. Indiana’s gaming regulators are furiously dotting the I’s on their own betting rules ahead of their expected launch in September, and their counterparts in Oregon are also pushing hard to make the kickoff of the upcoming NFL season.