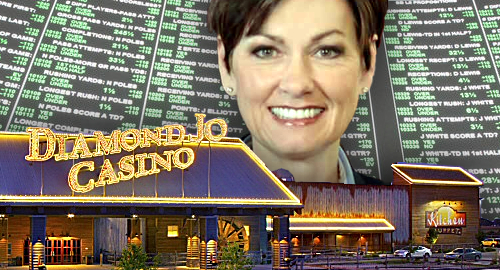 On Monday, Iowa Gov. Kim Reynolds signed Senate File 617, which will allow sports betting at the state’s 19 land/water-based gaming venues as well as via mobile devices. The Iowa Racing and Gaming Commission has yet to craft its betting regulations, but the expectation is that (at the very least) land-based betting will be up and running by the time the new NFL season kicks off this fall.

Reynolds’ signature was anything but a given, as she had largely kept her own counsel during the occasionally heated debates over betting between legislators in both state chambers. Whatever her personal views, her signature makes Iowa the third state (so far) to formally legalize betting this year, following recent signings by governors in Montana and Indiana, while Tennessee’s guv has said he’ll let his state’s betting bill become law without his signature.

Iowa’s betting legislation compares quite favorably to those other states, as it boasts a favorable tax rate of 7.5% (6.75% of betting revenue plus a 0.75% cut for local charities). License fees have been set at $45k with extremely reasonable $10k renewal fees. The state has set equally reasonable expectations for its own share of annual betting proceeds at between $2.3m and $4m, so at least we’ll be spared those whingeing ‘where’s the beef’ op-eds.

Iowa only has a little over 3m residents, but the betting legislation allows out-of-state customers to wager online provided (a) they register online accounts at Iowa’s casinos and (b) play online only within Iowa’s borders. That in-person registration requirement will expire in 2021, apparently on the assumption that all the bettors in, say, Nebraska, will have registered their accounts by then.

Reynolds’ signature came just one day before the one-year anniversary of the US Supreme Court striking down the PASPA federal betting prohibition. There are currently eight states in which legal wagering of some form is already underway, and it’s anyone’s guess how many states will have joined this party in another year’s time.