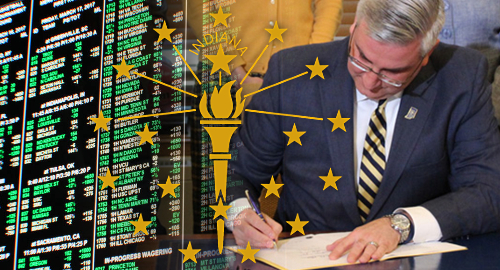 Indiana officially joined the legal sports betting party on Wednesday, bringing the total number of US states with legal wagering to an even 10.

On Thursday, the last day in which he had to act, Indiana Gov. Eric Holcomb signed the comprehensive gambling legislation approved by the state’s politicians late last month. The bill will allow sports betting at the state’s casinos, racinos and off-track betting parlors, as well as via mobile devices statewide.

Prospective licensees can begin submitting applications as of July 1 and the hope is that actual wagering (the land-based variety, at least) will get underway on September 1 through the issuing of temporary certificates. Licensees will pay $100k application fees and an annual fee of $50k while their revenue will be taxed at a rate of 9.5%. Casinos will be allowed to operate up to three betting ‘skins’ apiece.

Holcomb’s signature also offers Spectacle Entertainment the go-ahead to relocate one of its two riverboat casino licenses to a new $300m land-based venue in Gary. Spectacle will surrender its other license, which will be auctioned off for the right to operate a brand new casino in Terre Haute (pending local voter approval). The state’s racinos will also be allowed to offer live-dealer table games starting January 1, 2020.

DISTRICT OF COLUMBIA FAILS UPWARD
Meanwhile, over in the District of Columbia, the betting legislation the DC Council approved some months ago has officially become the law of the (very tiny) land after federal politicians declined to intervene. By law, all measures approved by the DC Council are subject to final approval by Congress, but everyone there was apparently too distracted by the latest Trump scandal to voice any objections to DC’s betting bill.

While DC’s bill allows for mobile wagering, this activity will be the sole responsibility of the DC Lottery and its technology partner Intralot. The District has no casinos, but retail sportsbooks will be permitted at local sports venues, such as Capital One Arena, and the management of these operations will be open to private firms.

DC’s timeline for wagering is the start of the new NFL season in September. Regulations are expected to be posted for public comment in June and formalized the following month.