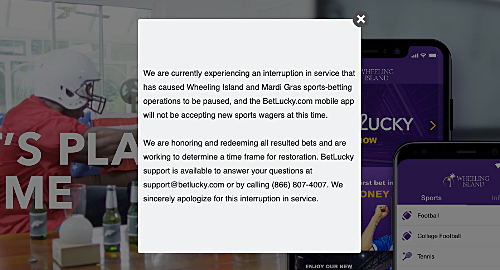 West Virginia’s sports bettors have lost access to their only online and mobile wagering options in the state’s regulated market, although their chances of legal online casino and poker options just got a lot better.

On Friday, Delaware North announced that its betting technology platform provider Miomni Gaming had “encountered a contract dispute with a third-party technology supplier.” It’s unclear precisely what dispute Miomni is having and with whom, as its sports betting operations in Nevada appear unaffected by the dispute.

Delaware North apologized for the hiccup and said that, while its casinos’ sportsbooks were temporarily prevented from accepting new wagers, they were “honoring and redeeming all resulted bets and are working to determine a timeframe to restoration.” The state’s three other sports betting operators – DraftKings, FanDuel and William Hill – have so far launched only land-based wagering at their respective casino partners’ venues.

Meanwhile, Friday saw the West Virginia state senate vote 26-7 in favor of the WV Lottery Interactive Wagering Act, which would allow the state’s five licensed land-based gambling operators to add casino and poker products to the state’s legal online gambling options. The state House of Representatives previously approved HB 2934 but a pair of minor amendments added during Friday’s debate means the House will now have to reapprove the amended bill.

Assuming the House cooperates and Gov. Jim Justice doesn’t ‘do a Michigan’ and refuse to sign the bill after the legislature has adjourned, West Virginia would become only the fifth state to authorize intrastate online gambling, joining Nevada, New Jersey, Delaware and Pennsylvania (although the latter has yet to actually launch its online operations).