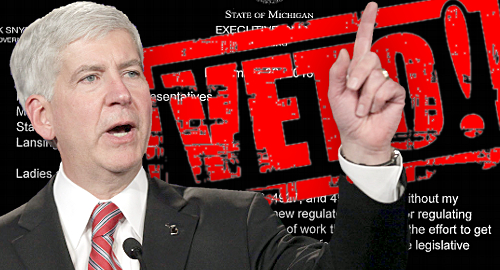 On Friday, Michigan’s outgoing Gov. Rick Snyder vetoed a smorgasbord of bills that the state legislature passed in the days before Christmas, including the HB 4926 bill that would have authorized the state’s commercial and tribal casino operators to launch intrastate online gambling operations.

Snyder issued a letter justifying his veto, saying he appreciated the “significant amount of work’ that legislators such as Rep. Brandt Iden had put into achieving consensus among the state’s commercial and tribal gaming operators, but claimed that government agencies “simply don’t have the data to support this change at this time.”

Snyder claimed that authorizing online gambling could cause the state’s gamblers to shift their focus “from the state’s iLottery program to internet-based gambling at casinos.” The Michigan Lottery launched its online sales division in November 2014 and it has gone on to become a significant contributor to the state’s lottery revenue.

Snyder suggested that the lower tax rates applied to internet gambling revenue under HB 4926 compared to the tax on lottery sales would result in a “concerning” decrease in funding for the state’s School Aid Fund.

Snyder also expressed worries that authorizing intrastate online casino, poker and – pending additional approvals – sports betting “will encourage gambling by making it easier to do.” Snyder didn’t find it “appropriate to sign legislation that will effectively result in more gambling, with a reasonable chance that the state could lose revenue” that could be devoted to responsible gambling programs.

Snyder closed by adding that he hoped “the legislature and next administration can more thoroughly evaluate the revenue implications from authorizing internet gambling.”

Snyder’s signature would have made Michigan the fifth US state to authorize intrastate online gambling, and the bill’s proponents had been widely hailed for satisfying the competing interests of commercial and tribal gaming operators. Similar schisms have repeatedly flummoxed legislators in other would-be gaming states such as California.

Snyder will surrender the governor’s office to Gretchen Whitmer on January 1, and the legislature will commence its new session on January 9. The new regime will undoubtedly mount a fresh push to approve another online gambling bill but the timeline to launch has now been delayed well beyond the 15-month timeline envisioned under the vetoed plan.