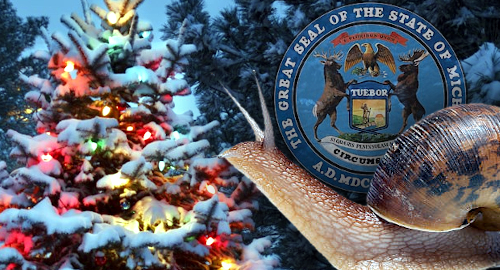 Michigan’s online gamblers might find both sports betting and casino products in their digital stockings this Christmas, although odds appear better that Santa might get waylaid and they’ll have to wait until January.

On Tuesday, the Michigan state legislature’s Joint Committee on Administrative Rules (JCAR) waived its right to subject the final draft of the state’s online gambling regulations to further (unnecessary) review.

The decision clears the path for the Michigan Gaming Control Board (MCGB) to officially file the final regs with the department of state, after which the MGCB can (finally) begin approving online casino/betting licenses.

The state approved its gambling expansion plans one year ago this month and the MGCB began accepting online license applications this summer. At the time, the MGCB set a ‘late 2020 – early 2021’ target window for launching state-approved online gambling but pressure is mounting to try for the earlier half of that range.

Online applicants have been frantically securing certificates of approval for their technical apparatus and on Monday the MGCB expressed cautious optimism that online gambling might commence this year should the JCAR play ball.

That scenario will prove tougher if the MGCB insists on a fixed online launch date to ensure no operators get a first-mover advantage, which would require all successful applicants – along with their commercial and tribal casino partners – to receive their MGCB licenses by the end of this month.

Detroit’s three struggling commercial casinos, which were forced into a second pandemic lockdown last month, have likely unleashed the lobbying kraken to ensure a December online launch. Not all of their tribal gaming rivals opted to shut their own operations during the state’s second pandemic wave but are just as eager to add online to their revenue mix.

Meanwhile, online operators DraftKings and FanDuel are continuing their efforts to boost brand awareness ahead of Michigan’s online debut. Both companies – who have respectively partnered with the Bay Mills Resort & Casino and the MotorCity Casino Hotel – announced official betting partnerships with the National Basketball Association’s Detroit Pistons on Monday.

Rival PointsBet previously signed a similar pact with Major League Baseball’s Detroit Tigers, while the National Football League’s Detroit Lions have paired up with BetMGM. Michigan has a population of around 10m, making it the 10th largest US state.