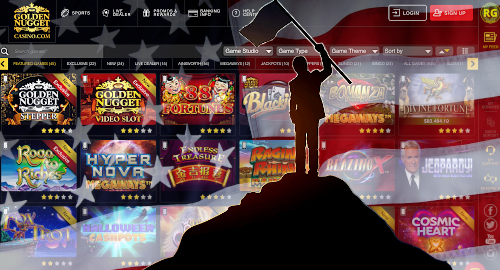 New Jersey’s leading online casino operator Golden Nugget is out to prove that its Garden State dominance is more than just a fluke.

On Monday, Golden Nugget Online Gaming Inc (GNOG) announced that it had secured West Virginia online gambling and sports betting market access through a deal with the Greenbrier Hotel Corporation, which operates the swanky resort of the same name.

The deal, which is subject to GNOG securing local regulatory approval, will see GNOG pay Greenbrier an undisclosed percentage of online gambling revenue, subject to minimum royalty payments over the term. The parties also exchanged the usual platitudes about how their lives were miserable and incomplete until they met.

The Greenbrier previously inked a similar deal with the FanDuel Group, which launched mobile sports betting in August 2019 but has yet to follow up with an online casino product. At present, West Virginia has only two online casino options; DraftKings and BetMGM (the latter outfit also operates off the Greenbrier’s online permit).

GNOG’s West Virginia pact comes just one week after the company secured online gambling access in Illinois through a partnership with Wilmot Gaming Illinois. The two parties inked a joint venture to build a new Golden Nugget-branded casino in Danville, for which GNOG will chip in $30m upfront and pay Wilmot a percentage of net gambling revenue (also subject to minimum payments) once the operation gets going.

Earlier this year, GNOG secured Michigan online market access through a pact with the Keweenaw Bay Indian Community’s Ojibwa Casino brand, with an eye toward launching both online casino and sports betting products once state regulators finally blow the starting whistle. GNOG also has plans to enter Pennsylvania’s online casino market, although the timeline is a little fuzzy.

Meanwhile, GNOG’s plan to list on the Nasdaq exchange will be discussed at a special meeting of the New Jersey Casino Control Commission this Wednesday (25). The plan involves cleaving off the Golden Nugget Atlantic City casino’s highly successful online operations into a standalone entity that will be acquired by a special purpose acquisition company (SPAC) known as Landcadia Holdings II Inc.

Landcadia is already listed on the Nasdaq as LCA but plans to be reborn as GNOG following the acquisition of the Nugget’s online business. The Nugget’s online casino is New Jersey’s unquestioned market leader, having topped the state’s monthly revenue reports for years, including October 2020, in which the Nugget claimed $28.1m of the overall $93.45m in online casino revenue.