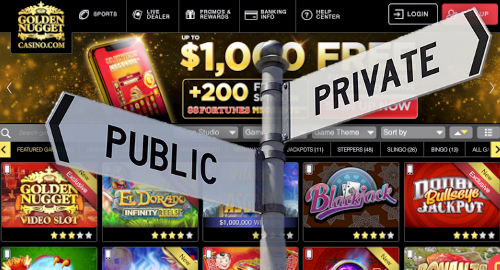 New Jersey’s market-leading online casino is being spun off from its parent company in an effort to replicate its online success in other US states.

On Monday, Fertitta Entertainment owner Tilman Fertitta announced that he’d reached a deal to spin off the Golden Nugget online gambling operations from his Landry’s land-based gaming firm into a standalone entity via a reverse takeover with Landcadia II Holdings, a ‘special purpose acquisition company’ (SPAC) co-sponsored by Fertitta and Jefferies Financial Group.

Landcadia, which already trades on the Nasdaq stock exchange, will acquire Golden Nugget Online Gaming (GNOG) and rebrand itself as GNOG following regulatory approval, which is expected by Q3. The deal values GNOG at around $745m, including Landcadia assuming $150m of GNOG debt.

Tilman Fertitta will remain GNOG’s chairman and CEO, while current GNOG president Thomas Winter, whose leadership has been credited with much of GNOG’s New Jersey success, will also remain in his current post. Fertitta will retain both a controlling economic interest and controlling voting interest in GNOG following the reverse takeover and listing.

Monday’s announcement caps off a remarkable turnaround for Tilman Fertitta, who as recently as 2014 called online gambling “a bust.” At the time, the Golden Nugget site had only been operational for around six months and ranked dead last in New Jersey’s nascent online market. Fertitta said then that he was “just rolling the dice” in case the site enjoyed a turnaround “in the next couple of years.”

The Nugget’s online casino eventually turned profitable in 2016 and reported net income of $11m last year. The company plans to expand into Pennsylvania and Michigan’s online markets early next year, but it remains to be seen whether the Nugget can replicate its New Jersey success without the assist provided by the other sites piggybacking on its Garden State license.

The reverse takeover echoes the process by which daily fantasy/sports betting operator DraftKings went public this spring. In that deal, DraftKings was ‘acquired’ by a different SPAC, Diamond Eagle Acquisition Corp, before a highly successful listing on the Nasdaq in April.